PDP Will Back Jonathan For 2011 Irrespective Of Zoning â€“ Lar 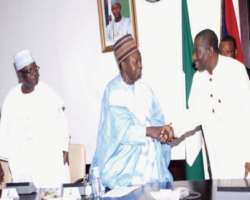 PHOTO: CHIEF SOLOMON LAR (M) MEETS THEN ACTING PRESIDENT GOODLUCK JONATHAN DURING A VIST TO THE VILLA AT THE PEAK OF THE JOS CRISIS.
Listen to article

San Francisco, May 18, (THEWILL) - Chief Solomon Lar, a former governor of Plateau State and Pioneer Chairman of the Peoples Democratic Party (PDP) has declared that the party will throw its weight behind President Goodluck Jonathan if he decides to contest the 2011 presidential election irrespective of the power sharing deal made between the north and south in the party.

Lar told correspondents inside his Jos residence that the power sharing deal of which he was a part of was not a permanent deal.

"The much-talked about zoning formula in the party was, after all, not a permanent issue as the party leadership is at liberty to consider President Goodluck Jonathan’s 2011 ambition, should he declare interest. No zoning formula anywhere in the PDP constitution bars the President from contesting, if he so wishes…The party will give him all the opportunity as a full-time party member to contest."

"Even when we agreed on the zoning, there was also a rule that before anyone becomes President, he must deliver his ward, local government and state to the party, but that was not the case as the rule was relaxed to accommodate the incapacity of Chief Obasanjo. Though we championed the zoning issue at the inception of democratic rule, the choice of Chief Olusegun Obasanjo was just to give other sections of the country a say because they were of the view that the North has had a good share in leadership in the country’s 49 years of existence,"Lar said.

"We were tempted to back Alex Ekwueme in 1999, but we said let’s consider the South-West because of the election that was annulled. We said let’s be fair to the South and give them a sense of belonging as Nigerians because after the annulment of the election, there were too many complaints. You will remember at that time it was military and civilian regimes and leaders continued to come from one part. Shagari, Buhari, Babangida, Abacha, Abdulsalami; all from the North and the entire country was complaining and some of us in the PDP said this time around, let’s give them a sense of belonging."

While insisting on relegating the 2011 debate to the background, Lar urged Nigerians to say prayers for the President to enable him deliver his set targets saying, "It is too early for such a debate."

Speaking on the proposed two-party for the country, Lar said he would not support the move because he believes that government should not fund political parties.

"I will not support that move. The present parties should remain, but funding should not be government’s burden and anyone who wishes to remain registered should be prepared to take care of its funding."