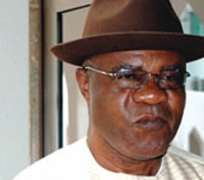 Members of the National Working Committee of the Peoples Democratic Party on Tuesday asked its outgoing chairman, Chief Vincent Ogbulafor, to immediately hand over the affairs of the party to the party's Deputy National Chairman, Dr. Haliru Bello.

Ogbulafor was at the party's secretariat where he briefly attended an emergency meeting of the NWC. He, however, left the meeting midway but no reason was given for his action as none of the top officials of the party was ready to speak on the issue.

Our correspondent learnt that the NWC members told Ogbulafor at the meeting that he should not see their action as being confrontational but that he should use his one-month notice of resignation to rest.

He had resigned his position last Thursday following pressure from President Goodluck Jonathan and governors elected on the platform of the party.

The President and the governors had advised him to resign and defend his prosecution on a N104m corruption charge.

Before Tuesday's meeting, the NWC had met without Ogbulafor on Monday, with Bello presiding. Our correspondent gathered that it was at this meeting that the decision was reached that their chairman should hand over the affairs of the party immediately.

This decision, according to the party source, was communicated to Ogbulafor on Tuesday. It was gathered that he had agreed to hand over to Bello on Wednesday (today), even though he would still remain in office till June 13.

In the meantime, the meeting of the PDP stakeholders from the South-East, where the issue of who succeeds Ogbulafor was expected to be discussed, has again been put off.

Our correspondent gathered that the disagreements among those expected at the meeting on whom to support among the aspirants was responsible for the action.

The meeting was expected to take place in the official residence of the Deputy Senate President, Ike Ekweremadu. This was the second time the meeting would suffer a setback.

The first one, which was convened by a former vice -president, Dr. Alex Ekwueme, was meant to take place in Owerri on Monday.

It was also shelved when the governors elected on the platform of the party from the South-East were said to have claimed that they could not attend.

However, Ekweremadu denied that there were disagreements on whom to support. Rather, he said that there was need to consult widely before such fixing a date for the meeting.

His Media Assistant, Mr. Paul Odenyi, who spoke with our correspondent on the telephone, confirmed the cancellation.

He said, 'Yes, the meeting has been cancelled and the reason is that the Deputy Senate President says there is need for him to consult widely before such meeting is convened.'

Eze and Nwodo are believed to be leading the pack.

Also speaking on the issue, the PDP National Vice-Chairman (South-East), Chief Olisa Metu, said members of the party from the zone had been meeting.

He also defended the large number of aspirants from the zone, saying it showed the strength of the party members in the area. He also said the zone would not present a consensus candidate for the position.