Nonviolent Action: Why and How it Works 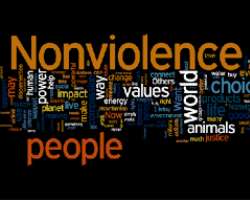 Nonviolent action is extremely powerful.Unfortunately, however, activists do not always understand why nonviolence is so powerful and they design ‘direct actions’ that are virtually powerless.

I would like to start by posing two questions. Why is nonviolent action so powerful? And why is using it strategically so transformative?

When an activist group is working on an issue – such as a national liberation struggle, war, the climate catastrophe,violence against women and/or children, nuclear weapons, drone killings, rainforest destruction, encroachments on indigenous land – they will often plan an action that is intended to physically halt an activity, such as the activities of a military base, the loading of a coal ship,the work of a bulldozer, the building of an oil pipeline. Their plan might also include using one or more of a variety of techniques such as locking themselves to a piece of equipment (‘locking-on’) to prevent it from being used. Separately or in addition, they might use secrecy both in their planning and execution so that they are able to carry out the action before police or military personnel prevent them from doing so.

Unfortunately, the focus on physical outcomes (includingactions such as ‘locking-on’ and its many equivalents), and the secrecy necessary to carry out their plan, all functionally undermine the power of their action. Why is this? Let me explain how and why nonviolent action works so that it is clear why any nonviolent activist who understands the dynamics of nonviolent action is unconcerned about the immediate physical outcome of their action (and what is necessary to achieve that).

If you think of your nonviolent action as a physical act, then you will tend to focus your attention on securing a physical outcome from your planned action: to prevent the military from occupying a location, to stop a bulldozer from knocking down trees, to halt the work at an oil terminal or nuclear power station, to prevent construction equipment being moved on site. Of course, it is simple enough to plan a nonviolent action that will do any of these things for a period of time and there are many possible actions that might achieve it.

But if you pause to consider how your nonviolent action might have psychological and political impact that leads to lasting or even permanent change on the issue in question but also society as a whole, then your conception of what you might do will be both expanded and deepened. And you will be starting to think strategicallyabout what it means to mobilise large numbers of people to think and behave differently.

After all, whatever the immediate focus of your action, it is only ever one step in the direction of more profound change. And this profound change must include a lasting change in prevailing ideas and a lasting change in ‘normal’ behaviour by substantial (and perhaps even vast) numbers of people. Or you will be back tomorrow, the day after and so on until you get tired of doing something without result, as routinely happens in campaigns that ‘go nowhere’ (as so many do).

So why does nonviolent action work?
Fundamentally, nonviolent action works because of its capacity to create a favourable political atmosphere (because of, for example, the way in which activist honesty builds trust), its capacity to create a non-threatening physical environment (because of the nonviolent discipline of the activists), and its capacity to alter the human psychological conditions (both innate and learned) that make people resist new ideas in the first place. This includes its capacity to reduce or eliminate fear and its capacity to ‘humanise’ activists in the eyes of more conservative sections of the community. In essence, nonviolent activists precipitate change because people are inspired by the honesty, discipline, integrity, courage and determination of the activists – despite arrests, beatings or imprisonment – and are thus inclined to identify with them. Moreover, as an extension of this, they are inclined to change their behaviour to act in solidarity.

It is for this reason too that a nonviolent action should always make explicit what behavioural change it is asking of people. Whether communicated in news conferences or via the various media, painted on banners or in other ways, a nonviolent action group should clearly communicate powerful actions that individuals can take. For example, a climate action group should consistently convey the messages to ‘Save the Climate: Become a Vegan/Vegetarian’, ‘Save the Climate: Boycott Cars’ and, like a rainforest action group, ‘Don’t Buy Rainforest Timber’. A peace group should consistently convey such messages as ‘Don’t Pay Taxes for War’ and ‘Divest from the Weapons Industry’ (among many other possibilities). Groups resisting the nuclear fuel cycle and fossil fuel industry in their many manifestations should consistently convey brief messages that encourage reduced consumption and a shift to more self-reliant renewable energies. See, for example, ‘The Flame Tree Project to Save Life on Earth’. http://tinyurl.com/flametree Groups struggling to defend or reinstate indigenous sovereignty should convey compelling messages that explain what people can do in their particular context.

It is important that these messages require powerful personal action, not token responses. And it is important that these actionsshould not be directed at elites or lobbying elites. Elites will fall into line when we have mobilized enough people so that they are compelled to do as we wish. And not before. At the end of the Salt March in 1930 Gandhi picked up a handful of salt on the beach at Dandi. This was the signal for Indians everywhere to start collecting their own salt in violation of British law. In subsequent campaigns Gandhi called for Indians to boycott British cloth and make their own khadi (handwoven cloth). These actions were strategically focused because they undermined the profitability of British colonialism in India and nurtured Indian self-reliance.

A key reason why Mohandas K. Gandhi was that rarest of combinations – a master nonviolent strategist and a master nonviolent tactician – was because he understood the psychology of nonviolence and how to make it have political impact. Let me illustrate this point by using the nonviolent raid on the Dharasana salt works, the nonviolent action he planned as a sequel to the more famous Salt March in 1930.

On 4 May 1930 Gandhi wrote to Lord Irwin, Viceroy of India, advising his intention to lead a party of nonviolent activists to raid the Dharasana Salt Works to collect salt and thus intervene against the law prohibiting Indians from collecting their own salt. Gandhi was immediately arrested, as were many other prominent nationalist leaders such as Jawaharlal Nehru and Vallabhbhai Patel.

Nevertheless, having planned for this contingency, under a succession of leaders (who were also progressively arrested) the raid went ahead as planned with hundreds of Indian satyagrahis (nonviolent activists) attempting to nonviolently invade the salt works. However, despite repeated attempts by these activists to walk into the salt works during a three week period, not one activist got a pinch of salt! Moreover, hundreds of satyagrahis were injured, many receiving fractured skulls or shoulders, and two were killed.

But an account of the activists’ nonviolent discipline, commitment and courage – under the steel-tipped lathi (baton) blows of the police – was reported in 1,350 newspapers around the world. As a result, this nonviolent action – which ‘failed’ to achieve the stated physical objective of seizing salt – functionally undermined support for British imperialism in India. For an account of the salt raids at Dharasana, see Thomas Weber. ‘“The Marchers Simply Walked Forward Until Struck Down”: Nonviolent Suffering and Conversion’ http://onlinelibrary.wiley.com/enhanced/doi/10.1111/j.1468-0130.1993.tb00178.x/

If the activists had been preoccupied with the physical seizure of salt and, perhaps, resorted to the use of secrecy to get it, there would have been no chance to demonstrate their honesty, integrity, courage and determination – and to thus inspire empathy for their cause – although they might have got some salt! (Of course, if salt had been removed secretly, the British government could, if they had chosen, ignored it: after all, who would have known or cared? However, they could not afford to let the satyagrahis take salt openly because salt removal was illegal and failure to react would have shown the salt law – a law that represented the antithesis of Indian independence – to be ineffective.)

In summary, nonviolent activists who think strategically understand that strategic effectiveness is unrelated to whether or not the action is physically successful (provided it is strategically selected, well-designed so that it elicits one or other of the intended responses, and sincerely attempted). Psychological, and hence political, impact is gained by demonstrating qualities that inspire others and move them to act personally too. For this reason, among several others, secrecy (and the fear that drives it) is counterproductive if strategic impact is your intention.

If you are interested in planning effective nonviolent actions, a related article also explains the vital distinction between ‘The Political Objective and Strategic Goal of Nonviolent Actions’. https://nonviolentstrategy.wordpress.com/articles/political-objective-strategic-goal/ And if you are concerned about violent military or police responses, have a look at ‘Nonviolent Action: Minimizing the Risk of Violent Repression’. https://nonviolentstrategy.wordpress.com/articles/minimizing-risk-violent-repression/

And if you are interested in being part of the worldwide movement to end all violence, you are welcome to sign the online pledge of‘The People's Charter to Create a Nonviolent World’. http://thepeoplesnonviolencecharter.wordpress.com

Struggles for peace, justice, sustainability and liberation often fail. Almost invariably, this is due to the failure to understand the psychology, politics and strategy of nonviolence. It is not complicated but it requires a little time to learn.