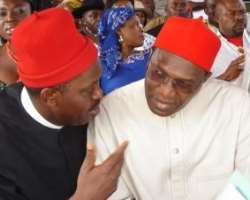 Thirteen aspirants including leading and former chieftains of the Peoples Democratic Party are  vying for the Anambra State governorship ticket of the All Progressives Congress, APC in the forthcoming governorship election.

He boasted that the political gladiators in the race were all qualified to govern the state and were capable of defeating the incumbent governor, Chief Willie Obiano in the forthcoming poll.

According to the chairman, all aspirants including those who are new in the party would be given a level playing ground in the party primaries.

He  said the party would next Monday continue its regular registration of members to accommodate new members.

“Our party constitution is silent on new members, on whether they should be given waiver or not but the national leadership of the party gives guidelines on the primaries. So, both new and old members have equal status in the party,” he said.

On zoning, Ibe said the party had not said it would adopt zoning formula in choosing its candidate, adding that it was the programme of the All Progressive Grand Alliance.

He scored the governor low saying the state administration was yet to touch the lives of the citizenry in the urban and rural areas.