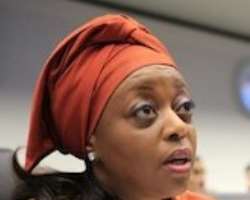 SAN FRANCISCO, January 24, (THEWILL) – The Economic and Financial Crimes Commission (EFCC) has urged the Federal High Court in Lagos to order the forfeiture of N9.08 billion allegedly laundered by former Minister of Petroleum Resources, Diezani Allison-Madueke, to the Federal Government.

This was argued by the commission's lawyer, Rotimi Oyedepo, on Tuesday , insisting that the allegedly laundered money is proceeds of crime.

“Can it be said that from the facts and circumstances of this case, that the N9,080,000,000.00, which is the naira equivalent of $40million cannot be reasonably suspected to be proceeds of unlawful activity?” he asked rhetorically.

THEWILL recalls that Justice Muslim Hassan had on January 6 ordered the temporary forfeiture of the money with an order to the banks holding the money to supply proof that it was not stolen money or risk losing it permanently to the federal government.