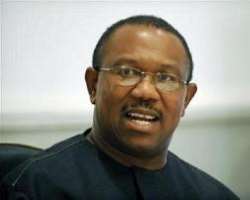 The industrial and Arbitration Panel has ordered the Anambra state governmrnt lecd by Mr Peter Obi to immediately and without delay py the sum of N882,027, 104 as salaries and leave allowances to staff of Anambra state Water Corporation (ANSWC) and their Anambra State Environmental Protection Agency (ANSEPA) counterpart.

This would serve as salaries owed the workers by the Anambrs ate government for upwards of 4 months. The panel also directed that the dead members of staff be paid also their entitlements through their next of kin.

At a press briefing yesterday at the ANSWC headquarters, Awka attended by stake holders, management of ANSWC and labour leaders, Secretary of Amalgamated Union of Public Corporation Civil Service Technical and Recreation Services Employees (AUCPTRE), Comrade Joshua Osita Onuaku disclosed that the award to the above named parastatals is in accordance with the provision of section 13 (20 of the trade dispute act CAP T8, laws of the Federal Republic of Nigeria.

Onuaku said that the award made by IAP in the trade dispute between AUCPTRE (1st Party), Anambra State government (Ist of 2nd party), ANSWC (2nd of 2nd party), Anambra state Environmental Protection Agency, ANSEPA (3rd of 2nd party) has now been communicated to the Honorable Minister For Labour and Productivity, saying that organized labour in the state expects the Obi led administration to respect and execute the judgment.

According to him, the award / recommendation by IAP is as follows, “that the 1st and 2nd party appropriate immediately the sum of N769, 174, 576.83 (exclusive of tax deductions, check off deductions and bank charges) to workers of Water Corporation being claims for as at December 2009.

He added that the IAP award states that the total sum of N108,752,528.87 exclusive of tax deductions, check off deductions and bank charges be also paid to workers of ANSEPA, while recommending that; “this payment be made less tax reduction(PAYE) on the gross outstanding by the 1st of the 2nd party to respective authorities.

“That the funds be paid immediately without further delay and in bulk, and not piece meal to ameliorated the pains caused the aggrieved workers as justification of their equal right, while not also trampling on the rights of the 91 dead staff of ANWC. That all entitlements be allowed to their next of kin or successors entitled without further delay.

Onuaku who made the 3-page document from Federal Ministry of Labour available to the Guardian, further stated that the IAP award also urged the 1st of the 2nd party to ensure appropriate promotions and salary increment across board to all aggrieved.

The IAP document signed by the director Trade Union Services and Industrial Relations, Mrs. O Olarenwaju on behalf of the honourable minister for Labour noted that a lot of injustices have been meted out to workers, leaving them in great pains.

Also speaking at the occasion, chairman Anambra state Water Corporation board, Comrade Casmir Madu recalled that staff in the parastatal have not been paid 48 month salary and eight years leave allowances.

The chairman also stated that the judgment means victory the workers, while tasking the Obi led administration to as much as possible ensure clearing the back log of salaries.