Why Eden Hazard is everything Roman Abramovich wants from CheClsea players: Pundit 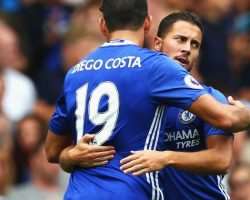 The Chelsea star has got his spark back following his torrid season last term.

The 26-year-old has scored nine goals and provided three assists in the Premier League, helping them to the top of the table.

Pundit Thompson is delighted to see the Belgian back to his best and reckons he embodies what Chelsea are all about. Chelsea to win: 2/11 (Paddy Power) Asked who Chelsea’s most important player is, he told Sky Sports : “I would still stay Eden Hazard.

“I know Costa is scoring the goals but for me Hazard has got his mojo back.

“He’s got his pace and personality back and he’s back to the form his was in before last season.

“He’s everything Roman Abramovich wants from his side, getting you off your seats when he gets the ball. At Chelsea that’s very important thing.