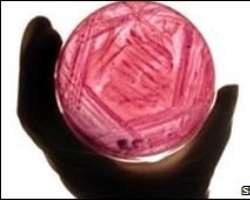 They say the problem is spawned by the overuse of antibiotics in the farming industry which enter the food chain.

Scientists from the University of Hong Kong found evidence suggesting resistance genes are being passed from animals to humans in this way.

Their findings are published in the Journal of Medical Microbiology.

The researchers examined Escherichia coli bacteria, which are responsible for the vast bulk of human urinary tract infections. (UTIs). It's a worldwide problem

Professor Chris Thomas from the University of Birmingham

Looking at samples from humans and animals they found an identical gene for antibiotic resistance was present.

The gene, called aacC2, encodes resistance to a commonly-used antibiotic gentamicin and was found in approximately 80% of the 249 human and animal samples the team studied.

Lead researcher Dr Pak-Leung Ho said: “These resistance genes may possibly spread to the human gut via the food chain, through direct contact with animals or by exposure to contaminated water sources.

“When the resistance genes end up in bacteria that cause infections in humans, the diseases will be more difficult to treat.”

Global problem
Although the research was carried out in only one region – Hong Kong – experts say the problem is global.

Dr Ho said: “With the international trading of meats and food animals, antibiotic resistance in one geographic area can easily become global.

“Health authorities need to closely monitor the transmission of resistance between food-producing animals and humans and assess how such transfers are affecting the effectiveness of human use of antibiotics.”

Professor Chris Thomas, an expert in bacteria at the University of Birmingham, said doctors in the UK were also seeing resistant strains.

“Antibiotic use in animal husbandry is tightly controlled in Europe.

“But even if the problem is being curbed here, people travelling abroad and moving from community to community will bring resistance with them and it will spread.

“It's a worldwide problem.”
He said the resistant infections could be treated with other, sometimes more expensive antibiotics. However, with time, resistance may develop to these too, he warned.

In the UK, it is estimated that one woman in three will have a UTI before the age of 24, and that half of all women will have at least one UTI during their lifetime. They are less common among men.