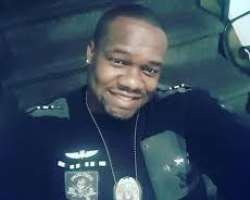 For several minutes, she struggled to utter a word. Mumbling and grieving silently as she tried to find her voice, it was a few, touching moments laced with plenty of emotions. When she finally spoke, they were words that reflected a heart ripped apart by anguish.

'They killed my brother like an ordinary animal,' she stuttered, looking for the next expression to cling on. 'They killed him in a ruthless manner. He did not deserve to die that way. We still cannot believe he is truly gone,' Lilian Ndiukwu, said as she battled tears.

Since the afternoon of January 12, 2017 when news of the gruesome murder of her cousin - Chuks Okebata, a Nigerian-born United States of America Army Reserve, in their native Umuduruorie in Mbaitoli Local Government Area of Imo State, spread like wildfire, all has not been well for the young woman, their immediate and extended family members, kinsmen and all who knew him closely.

The 35-year-old heavily-built military personnel, who had left his base in Philadelphia, US, on December 22, 2016 to travel down home in company with two of his white friends ahead of the opening of his new house four days later, had no inkling of what laid in wait for him when he made the long trip. Even though he had lived most of his adult life in his adopted homeland, Okebata, the eight child of an Anglican reverend, never forgot his roots and modest beginning.

The new house, apart from providing a decent shelter for him, his immediate family and friends whenever he visited Umuduruorie, would also provide the platform for him to continually bond with his native land. In spirit, soul and body - Chuks was a village man in every sense of the word.

'He loved everything about his hometown,' Ndiukwu told our correspondent during a telephone conversation earlier in the week. 'Even though his mother conceived him in the US, he was actually given birth to in Nigeria and in fact lived the first 12 years of his life in the village with his elder sister before they all moved to the US. For this reason, he loved the village and always looked forward to visiting whenever he had the chance.

'He decided to complete and open his house last December so that it would be easier for him to visit home more often. The ceremony of December 26 was a big feast; everybody was happy and had a great time. But we never knew that in a matter of days, our joy would turn into mourning,' she said as her voice grew colder - a testament of how heartbroken she still is.

Initially moving with armed escorts in his first few days in the country especially before his white friends travelled back to the US on December 29, Okebata felt there was no need to carry on with that since he had no score to settle with anyone and even had his own service pistol on him as well. Even though his mother, who also came home for the Yuletide, warned him against moving about freely on his own, the 35-year-old felt at home and saw no need for that. Standing well over 6ft and endowed with a massive and intimidating body build, only few mortals could match him in a physical brawl. But around 3pm on January 12, a handful of heavily armed young men wearing bullet-proof vests, who had laid ambush for him, pounced. He was returning home in company with two of his cousins after going to buy petrol and gas at a nearby filling station. The grief remains fresh for the family.

'The assailants came shooting sporadically in front of his house to scare people away. They later went to wait for him at the junction leading to his house. When they saw him, they ordered him to come down from his car. They accused him of being into illegal business. He quickly identified himself as US Army personnel and even showed them his service pistol. At that point they had collected his phones and that of our sisters, who were with him. They ordered the ladies to lie down in the car.

'It was after a while that my brother noticed they were assassins. He pleaded with them to spare his life that he was going to give them any amount they wanted. They refused and told him to go into the boot of their car. They drove out to a junction, close to a spot where caskets are produced and sold before shooting him on the head several times. His entire body was riddled with bullets,' she said.

Apart from sending shock waves down the spines of many residents of Umuduruorie and environs, the tragic incident has sadly changed the way the people live their lives today. The once serene and peaceful community has become a theatre of fear and apprehension.

'Everybody is still in shock. People are afraid to go out for too long. In fact these days, people run into their houses even before 6pm for fear of being attacked by criminals. Our village used to be a very lively place especially at this time of the year but the incident has spread fear and made the place look like a ghost town. A lot of people have moved to neighbouring towns at the moment,' she said.

Family members and all who knew Okebata closely described him as a man with a large heart. Often times, he was said to have sacrificed personal comfort to help people in need. According to Ndiukwu, he was on the verge of establishing a foundation to help the needy within and beyond his immediate native community when his life was cut short.

'Once, he saw a picture of me visiting the less privileged, he got across to me and told me that he would also love to donate to the needy and in fact establish a charity organisation when he came home for the Yuletide. We were all happy and looking forward to that moment before he was killed.

'Chuks liked helping people, he has assisted a lot of people in our community and even planned to do more this year before his life was cut short. His death is a big loss not just for us but for all those whose lives have been changed as a result of his assistance,' she said.

Days after his gruesome murder, a video, which was posted by the victim's sister - Ada Mbaeri, and captioned: 'Watch people and see what a hell my brother Chuks Okebata was going through with his wife before he was killed,' provided a new twist into the entire matter.

The video showing a verbal altercation between Okebata and his wife, Chinyere, known by some as Cyndy, before she eventually called the police on him, prompted many to accuse the woman of knowing something about his death.

In the footage, the visibly enraged and irritated woman asked Okebata to leave the house on several occasions while the victim could be heard protesting and insisting that he was not going to leave his house and children behind. In another recording, the children were seen crying while their father tried to console them, telling them he was leaving because he didn't want to go to jail. Later, two white police officers were seen arriving the family home after the woman put a call across to them.

The post generated a lot of reaction from far and near. While many, on the heels of the footage, concluded that indeed Chinyere must know something about his death, dozens others dismissed it as a normal argument and misunderstanding between couples.

Rubbishing the allegations as baseless and malicious, the victim's wife in a message to blogger - Amanda Chisom, said she knew nothing about her husband's death and was deeply pained by his tragic demise.

'I am the wife of the man who was assassinated, and I am just distraught. I do not even know where to start but it is only right I tell my own side of the story. I am innocent, God is my witness that I did not kill my husband or the evil that my husband's family is portraying me to be. My sister in-law posted that video to make me look evil but the part she did not tell anybody was that I was calling the police to save my life because he always beat me up and I was told to call the police whenever he started and that was exactly what I was doing, from the video you would see that I did not fight him or answer him. Should I have allowed him to kill me?

'We have been married for 13 years since I was 19, it has been beating upon beating, I have gone through surgeries because of beating he gave me. How can I kill my husband, we live together, till the day he left for Nigeria, I packed his things, how could I kill him. Who do I know to order a hit on the father of my children? I have no interest in his properties as suggested after all we built everything together. God knows I am innocent. I have endured all these years through his beating and cheating and I did not leave or kill him, why would I do it now? All I ask is that I am left to mourn in peace and the killers found and prosecuted,' she said.

But contrary to claims by Mrs. Okebata that the marriage was intact and that she in fact packed his luggage on the day he was heading for Nigeria, Ndiukwu disclosed that the two had been separated for more than three years following series of misunderstandings between them.

According to her, the marriage started experiencing cracks after the victim's wife demanded that they move to another city and away from her in-laws. Soon claims of mistrust began, culminating finally in their eventual separation.

'Chuks died a sad man because he felt his wife betrayed him after all the love and care he gave to her,' the young lady revealed. 'Chinyere was nobody when he married her from our area in Imo State but became suddenly wild after some years in the US. He couldn't control her again and she didn't want to see her in-laws anymore. In fact just to make peace reign between them, Chuks had to give in to her demands and rent another apartment away from his parents' house for them to live. But when the problems became unbearable, the two of them had to separate.

'My brother never really recovered from the pain of that incident until he was killed. He was a loving and extremely nice person, I don't know why anybody should end his life in such a cruel manner,' she said.

On the Facebook profile of the victim, his relationship status indicated that he was single while that of Chinyere neither indicated single nor married in the same section. Also, while only the photos of their two sons - Obinna and Chisom, were visible on the Facebook profile and albums of the deceased, that of his wife had a little girl in addition, suggesting something different. Several messages sent to the woman on Facebook to clarify this and also respond to a number of questions were yet to be answered as of the time of going to press.

However, Amarachi Anyanwu, another cousin of the late US Army personnel, said that she only knows about the two boys from the marriage. Like Ndiukwu, she confirmed that the pair had been separated for several years.

As investigations into the tragic killing continue by the Nigeria police, family members, relatives and friends of the victim have all called for the perpetrators to be brought to book. They say more than anything else, only that would heal the pains they currently endure. - Punch.