Open Letter to the Comrades of LAUTECH 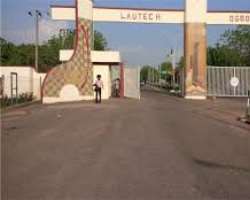 Dear compatriots,
Like the military would order, Attention! I urge you to listen carefully and do not disobey a ‘constituted authority’!

Let me start with the latest episode of your woes. I heard that one small girl insulted you; that she referred to you as “Generation of mannerless students” And you are angry. I was also told that the said girl is a daughter of a ‘constituted authority’ who is proud of owing salaries of workers.

My people in Yoruba land have a way of describing a wholly wrong situation, they would say “Amukun won leru e wo, oni isale len’wo eo wo oke.” (The implied meaning is that: A man with K-Legs has an entirely disorderly condition, not just the bent load he is carrying). There are so many things wrong with that poor girl, you shouldn’t be angry about her misfiring; she has been a victim of wicked circumstances.

Being a true daughter of her father, her upbringing remains pitiable. Just like her daddy, she must have thought that being the daughter of who she is comes with a constituted right to run her mouth like relay race. Perhaps she must have thought that her daddy’s ‘constituted authority’ comes with the insignia to manufacture English words at will; I’m still searching for the word ‘mannerless’ in English dictionary since she described you as ‘Generation of mannerless students’. You recall her daddy also asked which course a student is doing? Yes, the daddy and the girl are a constituted authority; you can’t expect them to follow the rules of English. And if you insist that the rule must apply to them, then ‘do your worse’.

Sigh! Her case is just like an obiter dictum, it’s by the way. There’s more meat to chew than breaking bones. Her case is sorted by one phrase “Like father, like daughter.”

Dear compatriots, here is the thrust of my letter; I want to talk to you about a certain ‘constituted authority’ that requires praise and worship, please pay attention. I heard that your school has been shut for over seven months and most of you have in fact developed pot bellies and gray hair as a result of the unending holiday. I heard that you were tired and thus recently peacefully protested to the office of a certain ‘constituted authority’ in charge of your school that you want your school reopened; I learnt that the outing turned to a jungle lecture titled “How to worship a Constituted Authority.”

I watched the video of the tutorial and the only title that came to my mind was ‘Shame of a Nation.’ Of course he has been owing far many people for months and none of them have dared to challenge the constituted authority. So I understand that he is used to expressions such as “yes Sir, as your lordship pleases.” No wonder he attempted to arrest you, just because you answered a yes or no question. But then, it goes to show that beyond the struggle for resumption, there are even more pressing battles to fight.

Freedom of expression is a fundamental human right guaranteed by Article 19 of the Universal declaration of Human Rights (1948), Article 9 of the African Charter on Human and People’s Rights, section 39 of the 1999 constitution of the Federal republic of Nigeria (as amended) and many other laws and instruments applicable to Nigeria. Therefore, what you have done is to express your pain to the constituted authority; it is called ‘peaceful protest’ and you are protected by law. Nobody can take that right away from you.

Back then in my days as an undergraduate of the prestigious Lagos State University, we had similar demonstrations taken to the office of the Lagos State Constituted Authorities. Some of the things they did were to call us for dialogue, to organise public hearings on the issues etc. That’s what civilised constituted authorities do.

On a final note dear comrades, I join other well-meaning Nigerians to salute your courage; you should never keep silent in the face of tyranny!