How 2017 budget can succeed: JK Randle 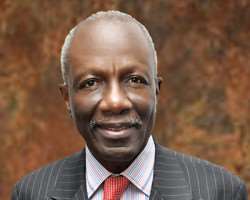 The 2017 budget which was recently delivered by President Muhammadu Buhari requires political tailwind if is to fly, says renowned accountant and public commentator, Bashorun J.K. Randle.

He explained that the most essential ingredient of the tailwind is public trust.

According to the former President of the Institute of Chartered Accountants of Nigeria (ICAN), “There is need for co-operation and understanding between President Muhammadu Buhari; the Governor of the Central Bank of Nigeria, Mr. Godwin Emefiele and the Minister of Finance, Mrs. Kemi Adeosun. Also, whichever way we lean, we must admit that the budget would require political tailwind if it is to fly. An essential ingredient of the tailwind is public trust.”

He said that over the last two or three decades, Nigeria has veered away from the ideal of 60:40, whereby sixty percent of our revenue would be consumed by recurrent expenditure leaving a healthy balance of forty per cent for capital expenditure.

He added that financial analysts who have been tracking Nigeria's budget and debts for several decades cannot but recall that the current insurgency (Boko Haram) which has engulfed the North-East region of our nation probably owes its genesis to what was inflicted on that area in the 1970's and 1980's.

Recalling the poor level of local manufacturing industries in some parts of the country, Randle highlighted that, “When we had only six states (which later became 12 states under General Yakubu Gowon), that part of the country was clearly devastated by arid desert, poverty and lack of industries. Even the few industries they had were ravaged by the Structural Adjustment Programmme (SAP) under the military government of General Ibrahim Babangida. Some of the early casualties were the tannery and shoe factories in Maiduguri.”

He noted that when the budget and debt management derail, the consequences are nearly always stupefying- resulting in riots; currency collapse; bank crisis; and sometimes regime change.

However, he cautioned that the Buhari's tag of the 2017 budget as “budget of recovery and growth” should avoid delay as it could drag on for many months before it is signed into law.

“Unless there is a drastic improvement in the government's capacity to deliver on its promises and put an end to “project formulation delays,” there is no hope that the 2017 budget will galvanise the economy out of recession.

That is the main reason we must take all the promises contained in the 2017 budget with cautious optimism, he said.

Sadly, Nigerians have become non-chalant about critical issues. A case in point was when the then Minister of Finance, Chief Anthony Ani FCA; MON presented his annual budget in 1995 he publicly disclosed that included in Nigeria's external debt was an amount of U.S. $1 billion which was ostensibly borrowed by Nigeria but was actually shared amongst eight prominent Nigerians whom he declined to name. The funds never reached Nigeria!! Nobody asked any questions about such a weighty issue.

J.K. Randle warned that if at the end of this year, Nigerians are again presented with excuses that these projects are not executed either due to revenue shortfall, inability to borrow money or delays in project formulation, chances are we will still be mired in a recession or worse.

It could well be that Nigerians have exhausted their entire stock of shock absorbers. We just do not give a dime (to quote a former president of Nigeria). In any case not only have we lost our collective sense of history, our schools and universities have dumped teaching history. Otherwise, the front page reports of “The Punch” and “ThisDay” newspapers of December 6, 2012 with the bold headline:

CONTRACT GALORE: N1 TRILLION FEDERAL CONTRACTS AWARDED IN 16 MONTHS would compel us to ask relevant questions about where we are now; where we are going; and why we just keep drifting from one crisis to another.”

Bashorun J.K. Randle was speaking at a reception held at “XKPMG House” Parkview, Ikoyi, Lagos to mark his 73rd birthday and fifty years in the accountancy profession