When Thugs Take Over The Affairs Of A State... 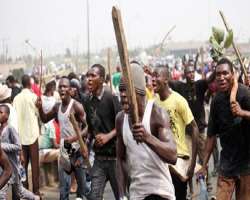 There is no doubt that the present crop of Nigerian political office holders are people with low-sense of reasoning or none. It is embarrassing that these set of people have sworn to always torment the people with their rod of poverty. I have nothing but serious contempt for these people because it is clear that they lack empathy and have poverty of humanness. They are the scum of the earth and the tormentors of the people of Nigeria because the people themselves have chosen backwardness, old-ways and repression by calling in desperate power-seekers with empty promises and empty brains. It is disheartening that government after government in Nigeria have always renege on their promises to make life more meaningful and beautiful for the suffering masses.

Recently, I watched a video whereby the administrative disaster that the people of Oyo State collectively choose showing-off how stupid and naive he is of the essence of governance to the protesting Students of LAUTECH. It must be noted that LAUTECH has been under lock-and-key close to eight months now as a result of the inability of the arrogant personified governor of Oyo State and the Abere herbalist governor of Osun State to pay the salaries of their workers in LAUTECH. With all that is being witnessed in LAUTECH especially the hardship the Students are being subjected to due to the closure of their school by the ineffective buffoons of Oyo and Osun State. One can hardly hold Ajimobi, Aregbesola and other tormentors of the people of Nigeria for sending their children abroad for better education because, they know how bad the educational sector of the country is and are not readily prepared to proffer solution to the many challenges facing the educational sector. And, instead of proffering solution(s), they are ready to run the educational sector aground because they sees the office they occupy as privileges making them to lose grip of the essence of governance for a better future to be assured.

There is no doubt that the statement that was credited to Ajimobi in the embarrassing video that was released by Sahara Reporters during the protest that was staged by depressed LAUTECH Students in reaction to the trauma being faced by them as a result of the ineffectiveness and inefficiency of governance is a pure embarrassment to democracy. No matter the provocation, such a statement should not have come out from the mouth of a serving governor of a State that was duly elected by the people of the State. Truthfully, i felt embarrassed while I was listening to the speech of the number one comedian of Oyo State and I can't help but ask how he became the governor of a State. The modern-dog and lousy governor of Oyo State must as a matter of urgency be call to order by the good people of Oyo State because they are the only one to call him to order because he has been able to cage the dis-honourable members of Oyo State House of Assembly who don't even know the essence of being parliamentarians.

The truth is that Ajimobi has been over-intoxicate
d by power that he don't even know that it was as a result of the votes of the majority of the people of Oyo State he occupies the office he is today. It is insulting for a lame and myopic governor of a State to be expecting the people to be apologising to him after he has failed to meet the needs and aspirations of the people in fulfilling his constitutional duties and the oath of office he sworn to. Ajimobi needs to be reminded that it is clearly provided in the constitution that the welfare of the citizens shall be the primary objective of the government. And, I think it is against the constitution, logic and moral to come out and pollute the public space with the dungs coming out of his ass-mouth. As a matter of clarification, Ajimobi was not the one that made himself governor, he did not constitute himself as an authority, he was entrust with the responsibility of meeting the demands of the people by providing them with the basic things of life part of which is good-quality education. He needs to put the people into consideration and also to understand that education is a thing that should be made available and easily accessible for the people. However, Ajimobi’s latest speech is anti-people, anti-children and anti-everything logic which can easily cause violence and destruction of public properties in the State. It is indisputable that Ajimobi is a devil that need to be resisted by all and sundry.

It is very shameful that a government that claimed to love and cherish children would now come out to assail itself of responsibility of the educational sector in the state. We must all say enough to these 'dealers' that are experimenting with our own fate while theirs are securely settled elsewhere. Abi, what social services would remain for this government to deliver to the people if it is allowed to abdicate its responsibility on education after reneging on promises willingly made to the people?

It is now evident even to the blind and the deaf ones in the society that Ajimobi is low in integrity, impotent and self-serving. There is no apology to say that Ajimobi has lose his sense of reasoning. Above all, his sense of humanity has been flushed away. This is now the time to help resuscitate his lost sense.