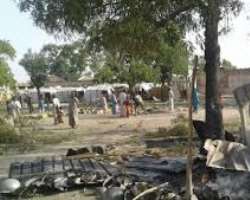 Displaced People (IDP) camp in Borno State.
The governor, who said it was strange that the military could

location, called for thorough investigation by both the military

authority and the international community to ascertain what actually

happened.
He chided President Muhammadu Buhari for jumping into conclusion that

the air strike was a mistake, saying; "by saying it was accidental,

the President already foreclosed investigation, which he ought to have

ordered before jumping into conclusion."
In a release issued on Wednesday by the Special Assistant to the

Governor Fayose maintained that “it is obvious that the Federal

Government is still deceiving Nigerians on its handling of the Boko

wanted to attack with fighter jet.”
“I sympathise with those hapless Nigerians who escaped death from the

that should be protecting them. May Allah (SWT) forgive their sins and

grant them Al Jannah Fidau.
“It is also my prayers that the Almighty Allah (SWT) will console

their families and grant them the fortitude to bear the irreparable

loss.
“I also call on all necessary authorities in Nigeria as well as the

international community to investigate the incident with a view to

unravelling whether or not the air strike was a mistake. And if it was

indeed a mistake, what led to it must be unravelled,” the governor

said.
While maintaining that Nigerians were not being told the truth about

the Boko Haram insurgency, Governor Fayose said; “In as much as they

are making efforts, which must be commended, the federal government

‘captured flag’ at the Presidency. But look at what we are witnessing

now. Look at bombings and attacks here and there by the same Boko

people were killed in Southern Kaduna, but what are they telling

Nigerians? They are even saying it with glee that just 204 people were

Kafanchan. Even if those killed in Southern Kaduna were 204, is that

not enough a tragedy that should bother the federal government?

“At this period, what Nigerians deserve from government at all levels

people free from all these calamities.”