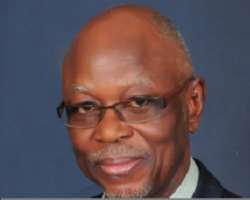 BEVERLY HILLS, January 16, (THEWILL) – The National Chairman of the All Progressives Congress, APC, Chief John Odigie-Oyegun, has stated that last Tuesday’s removal of Senator Ali Ndume as the Senate Leader is a “necessary act”, clarifying that it was not because of any misdeed on the part of the lawmaker.

Recall that the All Progressives Congress, APC, caucus in the Senate had ousted Ndume as its leader , immediately replacing him with Senator Ahmed Lawan as the Leader of the Upper Chamber.

Speaking when Lawan led other principal officers on a courtesy call on the APC leadership at the national secretariat in Abuja, Oyegun explained: “It is important to mention that the former Senate Leader was not removed as a result of any misdeed on his part or as a result of loss of confidence of his colleagues, but as a result of a necessary act that had to be done to reunite the Senate.

“We appreciate the service that he (Ndume) rendered to the Senate and the sacrifice that he has made is necessary for the National Assembly, the party and for the nation to move ahead.”

The APC Chairman spoke the same day that the former Senate Leader disclosed that his love for truth might be the reason he “sometimes run into troubled waters”.

Exchanging views with newsmen in Borno state on Sunday, Ndume disclosed that his love for the truth might be the reason he “sometimes run into troubled waters”.

His words, “I am an extrovert personality, and I have always stood on the side of the truth. Maybe that is why I sometimes run into troubled waters.

“I never planned to be a senator at the onset, it was God's decision. My target was to contest for the deputy senate president, but I ended up as the leader. So, I thank God for everything.”

Meanwhile, Lawan observed during the visit that recent peace moves by the APC has restored party supremacy.

“Tuesday last week was a historic day in the Senate. Our party, after the setbacks and the little crisis that we had with the emergence of the leadership of the Senate, our party decided that the remaining principal offices should be given to certain senators in order to have a united senate, especially the APC caucus.