With love asking after Lai Mohammed 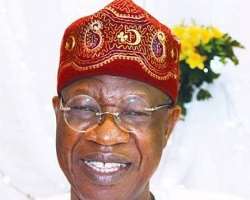 "The continued reoccurrence and persistence of repression through economic, political, and social-cultural means in the mistake called Jonathan’s government has created a nation of traumatized and dehumanized citizenry. The indicators which the evil ruling class refuse to see include declining economy, political instability, pervasive and entrenched dictatorial and repressive mode of governance, mass poverty and growing worsening condition of social and personal insecurity and disharmony, widespread opposition against the government, a conglomeration of geo-ethnic and parapoitic associations both sane ones and confused ones.

Consequently there are doubts in many quarters about the desirability and continuing existence of Nigeria as an indivisible and dissoluble sovereign nation.

The above paragraphs reminds me of epic Lai Mohammed when he was spokesperson of the All Progressives Congress (Then APC was in the opposition), there was hardly any day that one opened the newspaper without one news item or the other from the indefatigable Lai...christened Lie Mohammed by his numerous fans. Today I am looking for my Lai…

Currently Lai Mohammed is occupying the office of the Minister for Information, it is an office that has seen decent men like that young honorable dude during Obasanjo, so decent many cannot recall his name or that he even served, he was not allowed to learn the ropes of lying…his name Chukwuemeka Chikelu!

The office has seen the likes of strong woman Dora Akunyili, I am sure she'd be looking at Lai Mohammed and frowning. Chukwumerije has joined her in the world beyond, with his white beard; I remember there was another whited bearded one called Walter Ofonagoro, I don't know where he is now.

In case many have forgotten, the man with acidic tongue Fani Kayode was equally an occupant of that office, and lately we had another liar, he was even more called Liebaran than Labaran Maku a name his forbears called him. Infact my opening paragraph credited to Lai Mohammed could belong to any of these Ministers and it would still be apt.

In a nation where the president is entitled to a spokesperson, with the title Senior Special Assistant, and countless aides with media related responsibility one would think that the job of the Minister for Information would be easy, but alas it is not an easy one.

So where is Lai Mohammed, I hardly hear or put better, 'we' do not hear him these days, even as mere formality, after the weekly ritual called FEC Meetings we are hardly treated to the flamboyant Minister from Kwara state.

When a square, round or triangle meal is almost unobtainable in most homes, I do not see Lai Mohammed, is he now excommunicated from reality? I may be under duress to agree with Lai, that the President and his men are all working hard to make Nigeria great again. But really, have you heard the Igbo proverb that says ‘of what use is it running when you are on the wrong direction?’ When the President’s best efforts is translating into untold hardship for the generality of the nation.

Haba! Nigerians are not as difficult as your chaps on top think they are; all they ask for is the basics of life of which Allah has blessed us with the resources to have. Yet all the hard work of Mr. President in the last two years has shown little fruits.

Mr. Lai Mohammed, I know quite a few things this government has done fairly well, but these achievements are dwarfed by the reality. The current recession was one that started as a result of a democratically selected government’s confusion over where and how it wants to get to its destination, if at all it has one.

However Mr. Lai, the government you serve in, has not done anything different from the austerity measures or SAP of past regimes and administration, which all failed, and even if we anticipate success then I fear, not from reforms with no name, no definition, no direction, no duration, and without people orientation.

As Minister, and Nigerian, you are a friend and not a foe, but the current hardship, has caused a confirmed breach of human liberty and dignity. It is the fact that Nigeria under the present “regime” is suffering chronic crisis and measures; designed to perpetuate widespread destitution and under nourishment of mind, soul and body, mass poverty, unemployment, inflation and crime.

The present reforms has made it possible for access to critical social welfare goods and service to be restricted to only the rich. The rich that can still afford it from their loot of the so-called national cake take scholarships meant for the poor. The “regime” expectedly has found it difficult to do to simple things, mobilizing the vast national and human resources of the nation, effecting a proper restructuring of its institutions by reorientation and mobilization of citizens towards humanistic values, productivity, efficiency social justice, welfare and open accountability.

At this point I have lost the will to write further, I even ask is there any need, the crocodile and alligator may look alike but they are not friends either, so also the man who planted banana and expected plantain on the premise they look alike would be disappointed. There is a thin line between the success and failure of a venture, there is no fence sitting, Nigeria is at the threshold and brink of; a brink of where we have always been, as it was during Jonathan, so it seemingly is becoming with your boss Buhari.

My beloved Lai Mohammed, I want you to shout your voice hoarse, speak as government information points-man, tell Nigerians what the government is doing, tell us that all will be well, give us fact based, time set goals and how change is being effected. I need not tell you and Nigerians alike that only truth can win the war called Nigeria…on intent I have left out some of the bitter wars we are waging as a nation, but with love if we start telling the truth all may yet be well, when though—Only time will tell