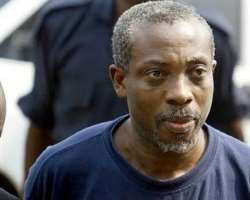 On the 11th of January 2017, we (the undersigned) on behalf of Mazi Nnamdi Kanu, the leader of Indigenous People of Biafra (IPOB), gave Raphael Lebeanya Uwazuruike four days to provide evidence to support his claim that Nnamdi Kanu and IPOB members are fraudsters who are out to deceive gullible people. We further discovered that Uwazuruike stated on TheCable.ng online news media that: “When I met him (Kanu) in London he had no job and no certificate; he was into internet crime.” This quote can be confirmed by clicking on the following link:

The four days given to Raphael Lebeanya Uwazuruike has elapsed, but he has not been able to provide any evidence to support his baseless accusations. Like the Hausa Fulani Islamic Jihadists he is now working for, Uwazuruike peddle allegations which he knows to be a lie and definitely has no evidence to substantiate. The same thing Buhari did with Nigerian judges, by intimidating them into believing that Nnamdi Kanu is guilty of some phantom treasonable felony as charged without proof, is the same thing Uwazuruike is hoping to do with brown envelope and the help of hostile Yoruba media implacably opposed to Biafra restoration.

Ralph Lebeanya Uwazuruike having betrayed his people the same way Ifeajuna did during the war, is hoping to destroy this present earth shattering resurgent global agitation for Biafra spearheaded by Nnamdi Kanu out of shame, envy, greed and jealousy. He hopes to damage the global standing of IPOB and that of our leader by impugning his and our collective integrity. Anybody who has been privileged to listen to Nnamdi Kanu preach his gospel of Biafra restoration on Radio Biafra or any of his numerous stress interviews will know that only very few people alive today in this world can be said to be his equal or match intellectually.

How can a man that taught millions of people on radio and television not be educated? All you need to do is watch one of Nnamdi Kanu's interviews on Biafra Television or on YouTube to validate this claim. Can anyone point to one single stress interview granted by Ralph Lebeanya Uwazuruike that received international acclaim throughout the decades he was left all alone to pilot the affairs of Biafra restoration? Predictably, the answer is a resounding no.

We did promise to unmask Uwazuruike to the entire world should he fail to respond with evidence within four days. We will start with Mazi Nnamdi Kanu’s journey through the academic world to put the records straight. We would invite Uwazuruike to be so forth coming with the history of his academic pursuits to let the world judge between Nnamdi Kanu and Ralph Lebeanya Uwazuruike who is educated and who is not.

For his secondary education, the IPOB leader attended the prestigious Government College Umuahia formerly called Fisher High School which boasts of the likes of Chinua Achebe, Cyprian Ekwensi, Ken Saro-Wiwa, etc. Throughout his stay at the school, Mazi Nnamdi Kanu was a boarding student and his dormitory was Cozens House, which is the hostel named after the co-author (Stone & Cozens) of a popular secondary school Biology textbook. He completed his secondary education and went further to the Rivers State School of Arts and Science popularly known as School of Basic Studies in Rumuola Road in Igweocha (Port Harcourt) for his advanced level studies.

Mazi Nnamdi Kanu started his tertiary education at the University of Nigeria Nsukka (UNN) where he was admitted into the Department of Geography, having agreed with his father to study Geography as a precondition to attending the Sowell Aviation College in Panama City Florida where he had a slot waiting for him to come and train as a pilot. While at UNN, he lived in the hostel, specifically in Akintola Hall and one of his closest friends was Samuel Ude from Abiriba who is now resident in the USA, Chinyere Asuzu resident in Aba Abia State, Chidiebere Iwebuka Asaba Delta State and many more who can be reached for confirmation. After two years at UNN and having received several theoretical lectures on rocks and typologies of rocks without setting his eyes on any practical example of these materials, Nnamdi Kanu felt that he was not getting the real training he yearned for and decided to persuade his father His Royal Majesty (HRM) Eze Sir Israel Okwu Kanu to send him overseas to obtain an education that is evidence-based and experiential.

Mazi Nnamdi Kanu traveled to England and was admitted to London Guildhall University now called London Metropolitan University (LMU). At LMU, he studied Politics and Economics and graduated with Second Class Upper Division, missing First Class Division very narrowly because of his publicly confessed difficulties with Applied Mathematics that accompanied Economics studies. It is on record that for the entire teaching life of Professor Ann Philips (Professor of Politics at London Metropolitan University), Mazi Nnamdi Kanu was the only student who achieved a perfect score of 100% (16/16) in her course because of the exceptional quality of his research work and the term papers produced by him.

We state without equivocations that Mazi Nnamdi Kanu is the first and only person to work on a Thesis that provided an academic critique of the popular orthodoxy of “Dependency Theory” propounded by the renowned Political Economists Samir Amir and Walter Rodney. Supervised by Dr. James Chiriyankadath, Nnamdi Kanu made his choice of a thesis based on his strongly-held belief that Africans should not blame Europeans or the Western World for their woes. His contention is that Africans are responsible for their lack-luster performance in leadership and governance and not people from other continents. In the history of academia till this day, no other African scholar has offered an academic critique of the Dependency Theory only Mazi Nnamdi Kanu, partly because of the penchant of most Africans towards finger-pointing instead of conducting dispassionate critical self-evaluation and introspection.

While at LMU, Nnamdi Kanu was part of a group of black students who came up with the idea to engage in post-graduation works that would transform Africa from its current stage of stupor to a continent and society where leadership and good governance will be the ethos of existence, human relationships, and transactions. The following were members of the group; Jacques Tobo (Cameroon), George Ogunka (Ikwerre-Biafraland), Ayodele Dalghety (Guyana), Lolade Cameron-Cole (Oduduwa), Mului Mpopo (Tanzania), and Chris Kehinde Olopo (Oduduwa). These individuals can be contacted for the veracity of this claim.

Having produced this abridged version of the academic history of Nnamdi Kanu, we invite the public to contact the individuals mentioned to ascertain the correctness of the information. On the other hand, Raphael Lebeanya Uwazuruike should provide the public with the name of the University where he studied Law and at least two names of his former classmates at the University. We would like to know the title of Uwazuruike’s Thesis and the name of his supervising professor.

Finally, Uwazuruike should provide the public with his Nigerian Bar Association (NBA) enrollment number since he claims to be a lawyer. Also, he should let us know the name and location of the Law Chambers where he worked or still working. From all indications, Raphael Lebeanya Uwazuruike is the person that does not have any certificate and therefore a fraudster. Had Uwazuruike Uwazuruike remained faithful to the cause of Biafra restoration and not engrossed in defrauding and deceiving unsuspecting Biafrans, Mazi Nnamdi Kanu and IPOB would not have emerged.