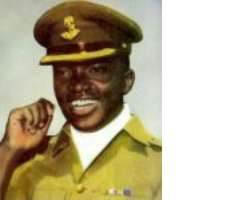 "In the early hours of Jan 15 1966, 51 years ago today, the man in this picture, Major Kaduna Nzeogwu, led a coup of junior army officers of mainly of Igbo extraction. Many were killed that night. The coup failed but the issues he, and later in 1991 Major Gideon Orkar raised in his own coup, are still pertinent.

When will the yoke of internal colonialism and subjugation be finally broken in our country? I have always condemned Nzeogwu and, to a lesser degree Orkar, but given what is happening in Nigeria today I have to say that both of them were not just heroes but men that fought to ensure that we were freed from what is nothing less than injustice, wickedness and slavery.

They failed in their quest for power and they were both killed: one was shot at the stake by General Babangida's governmrnt and the other was shot on the war front by Federal troops whilst fighting for his beloved Biafra.

As far as I am concerned they are both martyrs and their deaths shall never be in vain.

Continue to rest in peace O Christian soldiers and martyrs of the faith. In the new Nigeria we shall name streets, buildings and airports after you"-