Conte, Costa in bust-up over fitness 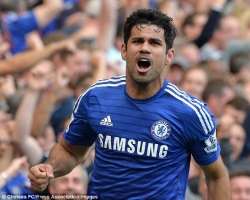 Striker Diego Costa has been left out of the Chelsea squad to face Leicester on Saturday after a dispute with a coach over his fitness.

The Spain international has not trained this week and has not travelled for the Premier League leaders' match with the defending champions (17:30 GMT).

The news comes amid reports he is the subject of an offer to move to China that would be worth £30m a year.

Costa, 28, has scored 14 goals and provided five assists this season.

Chelsea declined to comment.
It is understood Blues owner Roman Abramovich is not interested in releasing him from his contract, which expires in 2019, and would not entertain the idea of being forced to do so.

Speaking in early January, Costa admitted he wanted to leave Chelsea last summer, but said he was now happy to stay.

Chelsea had been hopeful of agreeing a contract extension with the Brazil-born forward, but the dispute with fitness coach Julio Tous raises new doubts.

Costa joined the Blues for £32m in 2014, and was understood to be close to a return to former club Atletico Madrid after a difficult 2015-16 campaign.

'Did I want to go? Yes, yes, I was about to leave,' he said earlier this month. 'But not because of Chelsea.

'There was one thing I wanted to change for family reasons but it wasn't to be, and I continue to be happy here.'

Shortly afterwards, manager Antonio Conte said he believed the striker was now 'completely focused' on 'fighting for this club and for his shirt'.

He added: 'When Diego decided to stay, I wasn't concerned. He is showing great patience in the right way, in every moment of the game.' -BBC.