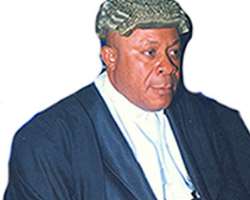 The chairman of the group, Mr. Fredrick Ikechukwu, stated this during the group’s visit to Chief Ighoyota Amori at his residence at Mosogar, Ethiope West local government, stated that the reconsideration of Abang’s posting to Delta is not necessary in order not halt further derailment of the nation’s democracy.

According to him, “Delta State is a PDP State, with peace loving people and has never had problem with federal establishments. It is our genuine fear that should the posting of Justice Okon Abang stay; strange things will begin to happen in the area of justice dispensation.

The group he said views the redeployment of Justice Abang from the Abuja Division of the Federal High Court as part of the deliberate plans of the APC to wrestle power from the PDP in Delta come 2019 elections.

“Nigerians are well aware of the hatchet jobs which Justice Abang did for the ruling APC while in the Abuja Division, and we are sure he will do no less especially as one of the dramatis personae in the PDP crisis and self-imposed National Deputy Chairman to Amodu Sheriff, who enjoys the friendship with Justice Okon Abang is from Delta State and have always procured controversial injunctions from Abang’s court.”

Ikechukwu noted the jubilation that greeted the posting of Abang to Delta State by APC and the faction of PDP led by the self-imposed Deputy National Chairman from the State is a clear indication to the expected patronage to the Federal High court judge who is renowned for giving judgments against the PDP.

While appealing for the redeployment of Justice Abang to any of the APC controlled states, Ikechukwu stated that, “Nigerians can still recall vividly that this judge gave judgment against the PDP governor of Abia State that led to INEC re-issuing another Certificate of Return to a man who did not contest election and also issued an Order to INEC to recognize Senator Sheriff’s candidates in Edo and Ondo states.”

He stated further that the PDP family in Delta rejects Justice Abang whom he alleged is a known agent of the APC who they have brought to the state to continue from where he stopped in the Abuja Division.

“We expect the judiciary to in the alternative retire Justice Okon Abang instead of posting him to Delta State where he is expected to inflict damages to the PDP family in the State. Very soon strange suits will be filed and already prepared injunctions and judgments will be delivered all to truncate democracy and destabilise PDP in Delta State.”

The group reaffirmed its support to the Olorogun Kingsley Esiso led executive of the PDP in Delta State.

They also commended a chieftain of the party, Chief Ighoyota Amori, a Special Adviser, on Reconciliation and Conflict Management to Senator Ahmed Makarfi-led faction of the PDP for his exemplary leadership qualities and effective representation of Delta State at the national level.