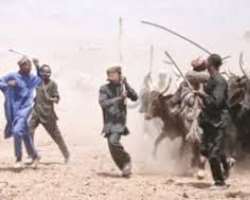 It was learnt that there has been a lingering bitterness between the herdsmen and farmers in the communities over incessant destruction of farmlands by the Fulani cattle.

It was gathered that the victims in the Abraka incident included two cousins, one Akpovona Felix and Sunday Akpupu, from Eku community, but residents in Abraka who were both reportedly killed in their farms.

The bodies of Akpovona and Sunday were discovered in their farms on Wednesday by community scavengers.

Akpovona, a father of five was said to have been shot by the herdsmen while his cousin was hacked to death and his finger chopped off.

Investigations revealed that the second incident happened in a farm along the Abraka-Benin Road, a boundary area between Urhoka-Abraka and Obiaruku, claiming the lives of two men and a woman who are indigenes of Obiaruku community.

“They had gone to the farm last week Tuesday, when they did not return the next day, a search party was sent to look for them only to discover their lifeless bodies at separate locations by a river bank near their farms,” Progress Aganbi, a native of the area narrated.

Police spokesman in the state, DSP Andrew Aniamaka, said: “I could only confirm that of Abraka, where two persons were killed.

The PPRO continued: “It was first reported as a case of a missing person on the third day. One Akpovena Godwin reported that his brother was missing. They are from Eku community.

“By morning of the fourth day, they found the deceased and that of Sunday Akpokpo. Sunday Akpokpo was 40 years while Felix Akpovena was 39 years. It was an actual case of murder. There is the suspicion that it might have been a reprisal attack”, he said.