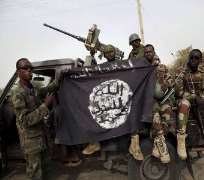 Confirming the attack, the spokesman of 27 Task Force Brigade, Lt. George Okupe in a text message said the attack was successfully repelled by the troops.

He however could not disclose the casualty both on the side of the Army and Boko Haram.

Lt. Okupe said, 'Buni Yadi came under attack at about 0615pm…but things are under control. Casualty figure of BHTs yet to be confirmed, on locales, none for now likewise own forces. However, details will be relayed to you soon'.

But a military source who spoke to our correspondent in confidence said it was a surprise attack by Boko Haram insurgents who Saturday night lunched a daring attack on 27 Task Force Brigade of the Nigerian Army Buni Yadi killing five soldiers, including a captain.

The source also noted that the insurgents came from the eastern side of the brigade in large numbers and lunched superior fire power on the military formation before they were repelled.

The source added that the Captain, name withheld is a medical doctor who has just been posted to Buni Yadi.

The casualty on the side of Boko Haram is yet to be disclosed, but another military source disclosed that the insurgents also suffered heavy casualty in the attack as many dead bodies were seen scattered in the bush.

He maintained that troops are still in pursuit of some of the fleeing insurgents.

'Nobody had time to start counting the numbers of the bastards that were killed because we were busy pursuing the one that were running, but I must tell you that many of them were killed and their dead bodies scattered in the bush', the source informed.

This is the first time the 27 Task Brigade has suffered a heavy attack from Boko Haram since its relocation from Damaturu to Buni Yadi in 2015.

Buni Yadi, the headquarters of Gujba Local Government was taken over by the insurgents for almost a year before it was recaptured by the military in May 2015.

The attack on 27 Task Force Brigade is coming barely two weeks after the insurgents are said to be in disarray in the north east following their dislodgement from Camp Zero, the last strongest fortress of the insurgents in the Sambisa forest.