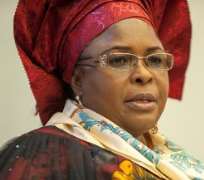 The Nigerian Police Force has broken into the Maitama, Abuja home of the immediate former First Lady, Dame Patience Jonathan.

An online news plaform, FrontiersNews, reported on Thursday that the  security operatives thronged the house at about 6p.m. local time.

According to the report,  the mission of their mission was not immediately known.

The anti-graft agency – Economic and Financial Crimes Commission (EFCC) has been having a running battle in recent times with the wife of the immediate former Nigerian leader, Dame Jonathan over some money allegedly found in her Skye Bank accounts.

The news online not confirm as at press time if Wednesday's evening raid of Dame Jonathan's house had anything to do with the EFCC investigation.

However, the lawyer to the Ex-first lady, Barrister Charles Ogboli, when contacted later, confirmed the incidence, saying: “Actually, it wasn't the EFCC that invaded the property of Dame Jonathan today; we have had issues of invasion last year by officials of NDLEA, EFCC.

“When I met with the officers who invaded the residence today, one of them who was on uniform said they are from a special unit acting on a directive from the Inspector General of Police, while another one who was on mufti claimed that he is from the Attorney General of the Federation (AGF).

“They said they wanted to search the property and told me to bear a witness to their operations, but I insisted I wasn't entering the premise, they broke the door, went in and took about three cheque books and six company seals.”