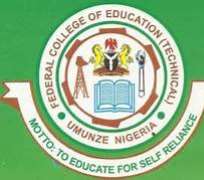 It is with deep sorrow and an unwavering call for help that we write to the media houses to bring the attention of the Federal Government of Nigeria to come to the aid of the Union and Staff of Federal College of Education, Akoka.

Before now, there have been various degrees of highhandedness in the way and manner, the Provost of the College and the Registrar have been running the institution as their private firms, making it near impossible to have a say or question unnecessary actions in the college.

Since the era of the SUG who once abducted and locked a directorate from the Ministry of Education- Otunba Oladele Olapeju, seemingly, the SUG president who led the students to carry out the unfortunate act today is a staff of the school- Aminu.

This has made it very nefarious and an endearing need to be silent or be silenced if anyone is against the acts of the management.

As of today, 04/01/2017, The Provost called for a congress when the union is currently on strike, has it stands now, they have issued letter of query to people who never attended the congress and dismissal letters are being prepared for union members of the Union.

We call on you, to kindly bring the attention of the Minister of Education, to wade into the matter promptly, as this dastardly act as affected the morale of the staff in this new year.

As it stands, the Registrar of the college whose tenure has just ended has employed over 165 people including their children to become lecturers.

We do hope our call for help will be granted us and the suspension given the union members be put on hold and investigations be called in to check the act of the management of the college promptly.