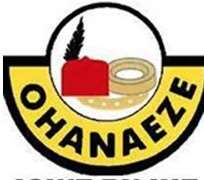 Igbo Clerics under the aegis of General Assembly of all Igbo Christian Organizations and Ministers (GAAICOM), ‘The Prophet Standing on the Gap for the Igbo Nation’, have written the Governors of South East and all Ohanaeze Stakeholders , including the Prof Anya O Anya led Electoral Committee, on the need for the postponement of the January 9th scheduled posts.

“Not giving enough publicity, the closeness of the date between the inaugural meeting of the electoral committee on the 29th of December and the commencement of the election staring from 4th January, a S-day period, which is grossly inadequate for any meaningful preparations”.

“The per-election selection and endorsement of candidates by the Governors which is an imposition of candidates on the people which is also against the Ohanaeze constitution, thereby creating tension in the polity”

“As at the 3rd of January, 1017, no electoral officer has been posted to any state, giving room for uncertainties, manipulation of congresses and electoral processes”.

GAAICOM proposed a two week extension to enable the electoral committee get its acts together. The clerics also advised Ohanaeze leadership and all concerned I order to contain the drift of the group into political ignominy and national irrelevance,

GAAICOM is the foremost Igbo Clergy Group and a major stakeholder in Ohanaeze Ndigbo. Its membership cuts across all denominations and its input in the Nigerian political space, in a noiseless manner, on he behalf of the Igbo race has been phenomenal.

Meanwhile Igbo Mandate Congress, IMC, have earlier described the election processes as fraudulent, and has threatened legal action, if transparency is not restored. This was contained in its press release of 3nd January, 2017. In another vein, Chief Enechi Onyia, (SAN), a prominent Ohanaeze stakeholder and Presidential aspirant, have taken the body to court over the electoral processes, He has described the entire process as criminal.

Chief Dr Nnia Nwodo (Former Minister for Culture and Information), Admiral Allison Madueke (rtd) and Prof Chiweyite Ejike are the major contenders for Ohanaeze leadership while Chief Enechi Onyia (SAN) have rejected the processes and headed for the courts.