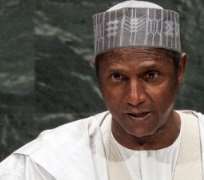 The senator representing Kogi west at the national assembly, Dino Melaye, on his official Facebook page, described the Late president Umar Musa Yar’Adua as the best president Nigeria ever had.

He said that under his regime, there was respect for the rule of law, he was “the first president to ever reduced the price of petrol in Nigeria, (From N75 to N70 and later from N70 to N65) and the economy did not collapse”, he was also the first president who succeeded in solving the Niger Delta crisis which he didn’t cause”.

Below is his unedited open Letter:
Dear Umaru Musa Yar’Adua, when you were around we called you: The BAD one. The SLOW ONE. The SICK ONE.

Yes, you were sick, in fact, sick all through your administration. We all cried for your resignation at the height of your sickness. Cursing you, your first lady and your supporters (The first set of Cabals).

Asking you to die if you want to die and allow the man with all the Goodluck in this world to lead us.

We conveniently forgot that even though you were gravely sick you were the first president to ever reduced the price of petrol in Nigeria, (From N75 to N70 and later from N70 to N65) and the economy did not collapse like the present leaders are making us believe. You even reversed the sale of our refineries.

We forgot that you didn’t afflict yourself with your sickness and so could do very little about it. But we still insisted that you just have to go, so that Nigeria can finally have her chance with Goodluck.

We forgot that even though you were terminally ill, you still succeeded in solving the Niger Delta crisis which you didn’t cause, but you found a solution. And even crushed d first Boko Haram uprising and caught its leader.

Now we have seen what a healthy president has done with the country.

His Excellency President Umaru Musa Yar’Adua, may your Soul Rest in Perfect Peace.

We will forever remember you and your leadership.