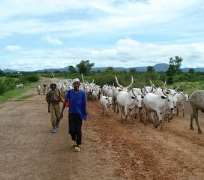 Cattle dealers in Garriki Cattle market, Awkunanu-Enugu, yesterday faulted media reports that their mosque was burnt down owing to a dispute between two people in the market that led to their deaths.

The cattle dealers said that a burnt property in the market was as a result of harmatan haze, which no single individual or group was identified as being responsible for the fire incident.

Governor Ugwuanyi was conducted round the market by the Chairman of the Garriki cattle market Association, Alhaji Baba Ali, former Senior Special Assistant to the Enugu state Governor on inter-community matters, Hon. Ahmed Abubakar, among other leaders of the Hausa community in the market.

'What happened was that one Hausa/Fulani Man carry knife chuk one Igbo boy and the Igbo boy died and the Hausa man too died, bringing about some riot but we have settled the matter. Nobody burnt any mosque.

What happened was a fire accident, this is harmatan period. We have two mosques here; you can see people praying there, the other one is in the other side there.

'Since then we have not had any other problem. Security here is very tight, both the DPO, Garrison commander are here day and night and the market is moving, nobody stopped the market to move.'

In his own narration, a former Senior Special Assistant to the Enugu  state Governor on inter-community matters, Hon. Ahmed Abubakar said:

'We've been living peacefully with our host, we live like brothers. If you come here, you see Igbo people speaking Hausa language. This thing that the media is reporting about burning of our mosque is not true.

This is our Friday mosque and you can see people praying there. This is the Mosque, today is Friday, look at all the Muslim they are doing their prayer here.

'We have another mosque over there. Then the other one is the place where we rest and this is dry season, fire incident happened. We didn't see anybody going to burn any house.

'Your Excellency, with the good work you are doing in Enugu state, both the Igbo and the Hausa people here are living peacefully like brothers. So welcome to the market.'

On the measure being put in place to forestall further occurrence, the Governor's Special Adviser on Security matters, Gen. Fred Eze (rtd) said 'The government is interested in peace of the place and that was why when what happened here happened, security agencies were deployed to contain the situation and immediately the market leaders put heads together, discussed and agree that there should be peace and everywhere is calm that is why the market is operating.

'It was a quarrel between two individuals and not an organized group crime. It was a problem between two people, it was not a group action but that was unfortunate. Two people had misunderstanding and what happened led to their deaths and so it had nothing to do with the groups in the market.'