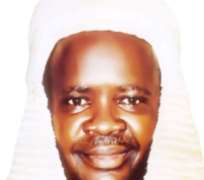 For the second time in one year, the Speaker of the Rivers State House of Assembly has resigned from office.

Adams announced his resignation during a sitting in the House of Assembly on Friday after the swearing-in of 12 lawmakers, who won the December 10 legislative rerun in the state.

It may be recalled that Dabotorudima's predecessor in office, Mr. Ikuinyi-Owaji Ibani, resigned on Friday, December 18, 2015, shortly after Governor Nyesom Wike presented the N307bn Appropriation Bill for 2016 before the House.

Ibani was succeeded by Dabotorudima, who represented the Okrika constituency, the same Rivers East Senatorial District as Wike.

And now, Dabotorudima has toed the path of his predecessor in office.

However, a new Speaker, Ibani Ikuinyi-Owaji, was immediately elected in an exercise that was conducted by the Deputy Speaker of the House, Mr. Marshal Uwom