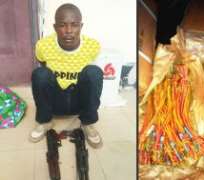 The popular Third Mainland Bridge located in Lagos, as we know it, would have been blown to smithereens on Boxing Day but for the quick action of the police that not only foiled the attempt to blow up the bridge, but also arrested one of the masterminds behind the planned attack.

The feat was achieved by the Inspector General of Police's Special Intelligence Response Team (IRT), which acting on a credible intelligence report, trailed and arrested one of the primary suspects and recovered not just rifles but explosives and the detonators.

The suspect was identified as 43-year-old Abiodun Amos, a member of a notorious militant group operating from the creeks of Ikorodu and Arepo areas of Lagos and Ogun States.

Amos, who is a top commander of the group, has since confessed to how he intended to blow up the Third Mainland Bridge in Lagos on Boxing Day.

Nicknamed Senti, the Ijaw native of Arugbo in Ese-Odo Local Government of Ondo State, was not just a commander but also the militant group's chief explosives maker.

Unknown to him, however, the IRT had been building intelligence on him and were assiduously working on tracking and pining him down.

Their diligence eventually paid off on the day he was to execute his nefarious plan, as he was trailed to a riverbank at the Majidu area of Ikorodu, Lagos.

After he was arrested, two AK47 rifles hidden in a jute bag (known in local parlance as Ghana-Must-Go bag) were found in his possession, after which he led the IRT operatives to a vehicle parked discreetly within Ikorodu, where a large cache of dynamites and detonators were stacked in the boot of the car.

THISDAY gathered that his arrest was due to an intelligence ‎report provided by the Office of the National Security Adviser (ONSA) in Abuja.

The report, which was passed on to the Inspector General of Police, Ibrahim Idris, indicated that the group was in the final stage of carrying out the said attack.

The IG was said to have directed his operatives at the IRT led by Abba Kyari, an Assistant Commissioner of Police, to commence a full-scale investigation.

The investigation unearthed the fact that the group was actually planning to blow up the bridge at the end of the month.

Further investigations revealed that the group had acquired large quantities of dynamites and several other explosives which would be used for the attack.

Police sources said they took the intelligence report seriously due to the threats made by the group in October 2016.

The militant group, which is notorious for pipeline vandalism, kidnapping and bank robberies, had demanded for amnesty, threatening to disrupt economic activities within Lagos and Ogun States if the federal government did not dialogue with them and grant them pipeline protection contracts.

In one of their threats, the leader of the militant group, known as General Ossy Ibori, had boasted that they were behind most of the high profile bank robberies and kidnappings, including that of three schoolgirls of Babington Macaulay Junior Seminary School in Ikorodu, four landlords at Isheri North Area of Lagos, a traditional ruler, the Oniba of Ibaland, Oba Goriola Oseni, and several others, within Lagos and Ogun State‎s.

In the interview, he had boasted that his group had over 21 generals commanding 7,800 battle-ready boys, adding that the group was rich enough to fight the federal government, as it had acquired thousands of military grade arms and ammunition.

He boasted that he would deploy them in disrupting economic activities within Lagos and Ogun States should the federal government fail to dialogue with the group and grant its wishes.

Armed with that threat, the IRT gathered its intelligence and trailed some members of the group, arresting several within Ikorodu. It is believed that the arrested suspects gave the police information to help them trail and arrest Amos on his way out of the creeks.

In his confessional statement, the 43-year-old suspect confessed that his militant group once engaged in pipeline vandalism but had resorted to kidnapping when it became difficult for them to vandalise and sell stolen petroleum products.

He said: “We went into bank robberies and kidnapping because we wanted to get government's attention and all we wanted was for them to grant us amnesty and also offer us pipeline protection contracts.

“We have made several appeals and the government is not listening to us. General Ossy said if we don't blow up the Third Mainland Bridge government would not listen to us.

According to a police report made available to THISDAY, the arrest of the Niger Delta militant-cum-kidnapper was facilitated after he planned to bomb the Third Mainland Bridge.

The report stated: “The suspect was planning to bomb the Third Mainland Bridge in Lagos and we intercepted him and recovered two AK 47 rifles, two cartons of explosives and detonators.

“This was after several weeks of meticulous follow up on credible technical intelligence generated by TIU and NSA on the activities of some notorious militants in Lagos/Ogun areas gathering explosives to blow up the Third Mainland Bridge in Lagos.

“IRT operatives eventually arrested one of the key members of the group who specialises in explosives – Abiodun Amos, aka SENTI – 43 years old, and a native of Ese Odo LGA, Ondo State.

“Subject was arrested at the bank of Majidun River in Ikorodu area of Lagos with two AK47 rifles hidden in a bag he brought from their hideout in the creeks.

“Subject has also mentioned other gang members. Analysis of the GSM number of the arrested suspect revealed his closed associates in Ikorodu area of Lagos.

“IRT teams were deployed to Ikorodu on December 26 to apprehend the suspect, but on sighting IRT operatives the suspect jumped out of his car and escaped into the bush.

“On searching the Toyota Camry car, two cartons of Gelatine dynamite explosives and hundreds of detonators were recovered in the boot of the car.

“Serious efforts are ongoing to arrest the remaining gang members by the IRT operatives.”

Shekau's Qur'an, Flag Recovered
Meanwhile, the Nigerian Army yesterday said it had recovered a Qur'an and flag belonging to the leader of the Boko Haram terror sect, Abubakar Shekau, in Camp Zero, the sect's headquarters in Sambisa forest.

“We believe that the Holy Book and the flag were abandoned by Abubakar Shekau while he escaped.

“The book will be taken to the Chief of Army Staff, Lt.-Gen. Tukur Burutai, for onward presentation to Mr. President.

“We have also made a lot of arrests. Our troops in Damboa arrested about 15 Boko Haram members. We also arrested one Musa from Potiskum on Christmas day.

“We therefore warn residents of the state to be wary of people coming to hide in and around their houses.

“We are also warning residents to report any suspected Boko Haram members hiding in their houses to the relevant security agencies and failure to do that would be tantamount to supporting and sympathising with the sect's activities,” Irabor said.

Irabor also disclosed that the army arrested some 1,240 suspected Boko Haram terrorists during a mop-up operation by troops inside Sambisa forest.

He said that the suspects were apprehended during a mop-up operation against the sect members in the forest.

“We are interrogating them to know whether they are Boko Haram members, because there is no way somebody that is not their member would live inside Sambisa forest.

“We are still on the trail of the terrorists and I want to assure you that all escape routes have been blocked.

“Within this period, also, about 30 fleeing suspected Boko Haram members have surrendered to the Niger multinational troops on the shores of the Lake Chad and we learnt that they were taken to Diffa in Niger Republic.

“The suspects included 24 male and six females.
“We would like to use this opportunity to encourage the terrorists to give up the fight because the window is still open,” the commander said.

Confirming the arrest of the fleeing suspected terrorist, the Nigerien Interior Minister yesterday said dozens of Boko Haram fighters gave themselves up to the authorities in southern Niger.

Minister Mohamed Bazoum said 31 young people from Diffa, who were enrolled a few years ago in Boko Haram, decided to surrender.

The fighters arrived in the remote desert town of Diffa in groups and were being held by local authorities.

“I learned that the first who surrendered was not arrested, and I surrendered.

“We expect a pardon from the government so that we can participate in the development of the country and help us get rid of the trauma,” a former Boko Haram combatant told journalists.

In June, tens of thousands of people fled Diffa as Boko Haram swept the region.

However, five Nigerien soldiers were killed by the militants near Diffa in September.

It was not clear what would become of the ex-Boko Haram fighters, but authorities said there was the possibility of reintegrating them back into society.

A security source told Reuters that a meeting was planned for Wednesday in Diffa to discuss “the conditions of surrender”. The source did not provide further details.

Boko Haram has killed over 20,000 people and displaced more than 2 million since 2009 in an insurgency aimed at creating an Islamic state in Northern Nigeria.

In recent years its attacks have spilled into neighbouring Niger, Cameroun and Chad.

Hundreds of Boko Haram fighters surrendered in Chad in October and November as the group ceded territory.

The group controlled an area about the size of Belgium in early 2015, but has since been pushed back by international forces including troops from Niger.

President Muhammadu Buhari on Saturday declared that the Nigerian Army captured its last enclave in the vast Sambisa forest on Friday.