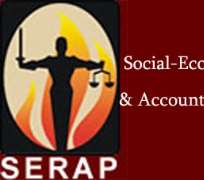 The organization urged the EFCC to “invite for questioning, and name and shame anyone suspected to be involved in the alleged diversion, including the contractors allegedly handling the project.”

In the petition dated 27 December 2016 and signed by SERAP senior staff attorney Timothy Adewale, the organization said: “The allegation that N500m has been lost to corruption has resulted in denying the girls access to education, and shows the failure of the former President Goodluck Jonathan government to live up to Nigeria’s commitments under the global Safe School Declaration.”

The petition reads in part: “SERAP believes that the diversion of the funds will expose the school to attacks in the future. This is a fundamental breach of the country’s obligations including guarantees of non-repetition, which contribute to prevention and deterrence of future attacks.”

“SERAP urges the EFCC to work with the Independent Corrupt Practices and other Related Offences Commission (ICPC) to set up a mechanism to monitor government’s spending of the safe school funds in order to ensure that the funds are spent exactly to prevent and deter future attacks, and to allow the girls to go back to school as soon as possible.”

“SERAP is seriously concerned that the school has remained in a state of disrepair since the abduction of the girls, and students have remained at home.”

“SERAP is concerned that the alleged diversion of N500m meant for reconstruction of Government Girls School in Chibok has directly violated the right to education of the girls, as guaranteed under the International Covenant on Economic, Social and Cultural Rights to which Nigeria is a state party.”

“The diversion has undermined the obligation of the government to take step to the maximum of its available resources to achieve the right to education. The alleged diversion also shows a serious breach of anticorruption legislation including the EFCC Act, and Nigeria’s international obligations under the UN Convention against Corruption and the African Union Convention on Preventing and Combating Corruption both of which the country has ratified.”

“The EFCC should ensure full accountability and bring to justice anyone found to be responsible for corruption and diversion of safe school funds. The EFCC should also ensure that all proceeds of corruption are recovered and returned back to the treasury.”

“This request is based on allegation by Governor Kashim Shettima that N500 million set aside by the government of former President Goodluck Jonathan, is missing and cannot be accounted for. The funds were released for rebuilding of the Government Girls School in Chibok under the Safe School Initiative programme, which was commissioned former Minister of Finance, Dr. Ngozi Okonjo-Iweala.”