My Vision Is To Create Conducive Environment That Encourages Investments- Okowa 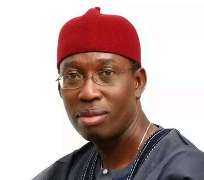 Delta State Governor, Senator Dr. Ifeanyi Okowa, has disclosed that his vision for the state is to bridge critical infrastructure gap, create a conducive environment that encourages investments and meaningful engagement of Deltans, especially the youths describing them as future leaders

Okowa explained that such lofty vision which is lucidly encapsulated in the SMART Agenda is being vigorously pursued by his administration which, he said, has initiated an economic development approach geared at integrating the entire land mass of the state through good network of roads that link communities and cities across the three Senatorial Districts of the state.

The Governor stated this during the fourth biennial public lecture of the Enuani Democratic League (EDL) held at Ejeme-Aniogor in Aniocha South Local Government Area of the State.

Represented by the State Commissioner for Information, Mr. Patrick Ukah, Okowa said his administration is conscious of the challenges facing Nigeria, of which the state is not an exception, noting that his government is working assiduously to tackle the difficulties and deliver prosperity to all citizens.

His words: “Our vision is to achieve sustainable development by building necessary infrastructure and creating the conducive atmosphere that would encourage investments and the meaningful engagement of our people, especially the youths to whom the future really belongs.

“Our economic development approach aims at integrating the state through good network of roads that link communities and cities across the state. This will also include the building of a befitting state capital. It is our goal to see that the completion of on-going projects across the length and breadth of the state is to give nerve and impetus to commerce”.

He called on all Deltans to encourage investors and also contribute their quota in the task of developing the state, assuring that State Government would continue to encourage and assist genuine investors who are out to serve as agents of positive social and economic change in all communities of the state.

On the yuletide, Okowa called on Deltans to imbibe the spirit of good neighbourliness, love, understanding and peaceful coexistence, noting that there is no gain in violent exchanges.

The Governor also commended the EDL for holding tenaciously to the spirit and mission of the group which is geared towards deepening the root of democracy in the Anioma clime.

Iwebunor said “when the harvest was plenty, the labourers were few" adding that at present, "the wealth gave way to poverty and penury, debt and slavery”.

He said the sterling qualities of Governor Okowa as typified in his commitment to leaving indelible marks in the annals of the state justify the biennial event which was held in his honour.

In a lecture entitled “The Anioma Nation and Democratic Consolidation in Delta State”, a professor of History and Strategic Studies at the University of Lagos, Prof. J. G. N. Onyekpe, urged political leaders to rise above the obnoxious divide and rule system of governance, noting that the principles of egalitarianism must be adhered to the distribution of resources and democratic dividends.

Prof. Onyekpe, who admitted that the Anioma has overcomed the shackles of perceived marginalization with the emergence of Okowa, advised the Governor's kinsmen not expect the concentration of the state's resources in their domain alone, noting that the pan-Deltan initiatives of the Governor must be sustained at all times and in all circumstances.

In an interview with newsmen, the member representing Aniocha South constituency in the State House of Assembly, Hon. Angela Nwaka, urged Deltans to continuously support the current administration which, according to her, has achieved much despite palpable economic constraints.