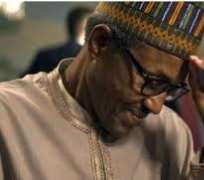 The ruling All Progressives Congress (APC) on Monday stated that Nigerians were currently undergoing hardship and difficulties.

The spokesperson for the APC, Mallam Bolaji Abdullahi, in an interview with journalists in Ilorin, the Kwara State capital, pleaded with Nigerians to persevere, adding that things would be better for the people.

He argued that though things were currently difficult in the country, it did not mean that President Muhammadu Buhari had economically failed the nation.

According to him, Buhari is doing his best to address the national challenges.

He said, 'It will be unfair to say the APC government has failed on the economic front, when we have a four-year tenure. If you plant a mango tree that has four years gestation period, the fact that it is just germinating does not mean your crop has failed.

'There is so much hardship in the country at the moment and we are the first to acknowledge that. But what gives us courage and comfort is that the Federal Government of Nigeria, under the leadership of President Buhari, is working round the clock to solve this problem and bring succour to Nigerians. That is why the 2017 budget has been tagged 'Budget of Recovery.'

'This is probably the necessary thing to do to make the kind of adjustment that we need to make as a country. We recognise that things are very difficult, but we believe that by the grace of God, if we all persevere, we will have the kind of country that we all desire.'

Abdullahi, a former Minister of Sports, commended the Nigerian military for taking over the Sambisa Forest in Borno State, believed to be the haven of the Boko Haram insurgents.

The APC spokesman said several other Chibok girls, abducted by the insurgents, had yet to be rescued, adding that the party was hopeful that the other schoolgirls in captivity would be rescued.

Abdullahi said, 'The recent takeover of the Sambisa Forest by the military is a great accomplishment by the Nigerian Army, the Federal Government and the APC government.  You will recall that one of the cardinal pillars of our campaign in 2015 is to restore security to Nigeria and defeat Boko Haram. So, this is a major accomplishment in that direction.

'I want to seize this opportunity to congratulate President Muhammadu Buhari for his doggedness, commitment and of course, the Nigerian military and the gallant forces that have fought terrorism to a standstill.

'The girls are still missing; we have not recovered all of them. We believe that by the grace of God, with the progress made so far, that will be accomplished.'

'The APC government has made a remarkable progress to the extent that we can say that Boko Haram is no longer capable of terrorising Nigeria the way they used to do in the past.' - Punch.