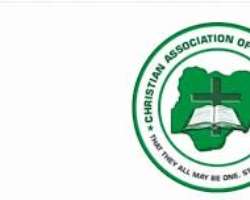 The Christian Association of Nigeria (CAN) on Monday rejoiced with all Christians in the country as they celebrate the birth of Jesus Christ amidst economic recession.

CAN's message was contained in a statement by its President, Rev. Dr. Samson Olasupo Ayokunle, as it also identified with the victims of the Boko Haram terrorists in the North East and victims of on-going killings in the Southern Kaduna.

He said, “I congratulate all Christians during this Christmas season when we are commemorating the birth of our Lord and Saviour, Jesus Christ. We thank God for the joy and hope that the season has brought to all of us”.

While advising Nigerians to embrace courage to confront the economic recession and the attendant problems, he asked them to learn from Joseph, the husband of Mary who was initially disappointed with the unprecedented pregnancy of his fiancée, Mary.

“I admonish all Christians and of course all Nigerians to pick up courage and move on with their lives inspite of the challenges facing us as a nation. Though Joseph was disappointed when he saw Mary pregnant thinking it was an outcome of her unfaithful sexual intercourse, he decided not to allow that to determine his future. He made up his mind to put her away privately and move on with his life. That was courage", he stated.


Ayokunle, who is also the President of the Nigerian Baptist Convention, expressed optismism that God would turn the unpleasant situation in the New Year (2017).


He said, “Although things turned out this year in the way we never expected, the Lord who intervened through a dream in the case of Joseph and restored their relationship with a baby as icing on the cake will restore prosperity to our land and make the coming year a year of abundance in the name of Jesus”.

Also, CAN, in a statement by its Director, Legal and Public Affairs, Kwamkur Samuel, has sent message of condolences and sympathy to the Internally Displaced Persons and families of victims of the on-going killings in the Southern Kaduna.


The statement reads: "The leadership team are grateful to the Almighty God that despite the excruciating challenges of the economic recession and the act of terrorism by various terrorists groups and militia in the Middle belt particularly the Southern Kaduna and other parts of Nigeria, the faithful went ahead with the celebration of the Christmas, they are able to keep hope alive.

"CAN sympathises with the victims of various attacks spread in the IDPs camps across the nation and our members in Southern Kaduna where some murderous groups have been killing despite the heavy presence of the security operatives."

Samuel charged those in positions of authority to rise above religious, ethnic and political sentiments in the New Year in order to restore peace and unity to the strife-torn regions of the country.

He said, “As we prepare for the task ahead in the New Year, it's the prayer of the Nigerian Church that the Government at all levels be ready to put aside ethno-religious sentiment and put Nigeria and Nigerians first. The government should make effort to balance the fight against corruption and also take seriously youth restiveness, high rate of unemployment and the security challenges which retard the growth of the nation.

“As we march into the New Year, it's our prayer and hope that every Nigerian will see the need to put in his/her best for the growth and development of our dear country. CAN wishes all Nigerians successful celebrations and the best of the coming year.”