The History of "Boxing Day" - the Day after Christmas! 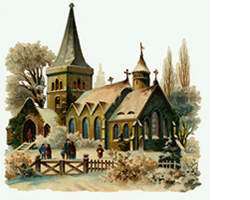 Boxing Day takes place on December 26th and is only celebrated in a few countries; mainly ones historically connected to the UK (such as Canada, Australia, South Africa and New Zealand) and in many European countries. In Germany it is known as "Zweite Feiertag” (which means 'second celebration') and also “Zweiter Weihnachtsfeiertag” which translates as Boxing Day (although it doesn’t literally mean that)!

It was started in the UK about 800 years ago, during the Middle Ages. It was the day when the alms box, collection boxes for the poor often kept in churches, were traditionally opened so that the contents could be distributed to poor people. Some churches still open these boxes on Boxing Day.

It might have been the Romans that first brought this type of collecting box to the UK, but they used them to collect money for the betting games which they played during their winter celebrations!

In Holland , some collection boxes were made out of a rough pottery called 'earthenware' and were shaped like pigs. Perhaps this is where we get the term 'Piggy Bank'!

It was also traditional that servants got the day off to celebrate Christmas with their families on Boxing Day. Before World War II, it was common for working people (such as milkmen and butchers) to travel round their delivery places and collect their Christmas box or tip. This tradition has now mostly stopped and any Christmas tips, given to people such as postal workers and newspaper delivery children, are not normally given or collected on Boxing Day.

Boxing Day has now become another public holiday in countries such as the UK , Canada , Australia and New Zealand . It is also the traditional day that Pantomimes started to play.

There are also often sports played on Boxing Day in the UK, especially horse racing and football matches! It's also when shops traditionally had big sales after Christmas in the UK (like Black Friday in the USA).

The 26th December is also St. Stephen's Day. Just to confuse things, there are two St. Stephens in history! The first St. Stephen is believed to have been a very early follower of Jesus and he is said to have been the first Christian Martyr (a person who dies for their religious beliefs). The Bible says that Stephen (who was a Jew) was stoned to death by some other Jews (who didn't believe in Jesus).

The second St. Stephen was a Missionary, in Sweden, in the 800s. He loved all animals but particularly horses (perhaps why there is traditionally horse racing on boxing day). He was also a martyr and was killed by pagans in Sweden. In Germany there was a tradition that horses would be ridden around the inside of the church during the St. Stephen's Day service!

St. Stephen's Day (or 'the feast of Stephen') is when the Carol ' Good King Wenceslas ' is set. It's about helping the poor - so it has a strong connection to Boxing Day.