Leave Us Alone” – Why Every MMM Participant Has Already Lost. {Article 7} – Sunday Adelaja (Part one) 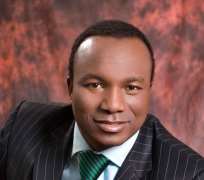 Maybe you are thinking what is this prose in the previous paragraph. Well it is a lyric from a rather funky song that is being distributed by MMM participants. My amazement had no limit when I saw this video clip on YouTube. Four young Nigerians, three boys and one girl, singing as if they were leading a church choir with the same passion, zeal, energy and enthusiasm. It all looks like a praise and worship session until you listen more attentively to the words of the song. You will feel like you’ve just been hit by a 16-wheel truck. At least to any human being that is still rational, those who have not lost their ability to think and reason will know that our country is fast heading to a monumental catastrophe, with this kind of attitude.

CALLING GOOD EVIL AND EVIL GOOD
For obviously Christian youth to be coming to sing on worldwide public platforms about Ponzi and pyramid schemes, unashamedly that is a huge shame. Worse still, these young people are not simply singing about what is well established worldwide to be an act of fraud, stealing and theft. What they are doing is actually a multiple of acts of ignorance.

“Goodness is something chosen. When a man cannot choose he ceases to be a man.” ― Anthony Burgess

3. These people are not only proclaiming to the world that they are thieves and fraudsters, they are actually celebrating these vices.

4. Another thing they are doing is they are rejecting the voice of reasons by saying “mind your business.”

5. They are shutting up the mouth of the elders, people who know better than them, which is a direct violation of the sixth commandment. Honor your father and mother, that it may be well with you and you may live long.

6. They are praising the vice of bad debt, not borrowing for business, industry or commerce.

7. They are borrowing money to put in a fraudulent scheme, putting their benefactors in danger of never ever getting their money back.

8. The conscience of these young people is totally sealed, demonstrated by their actions.

9. These young people lack the ability to distinguish between good and bad. That is a national crisis.

10. From the way they think, it is obvious they are talented. Unfortunately, their talent is being used to glorify the virtues of darkness.

I am concerned, worried and alarmed by the apparent decline in virtues that I observe, not just in the Nigerian nation, but in our youth these days. In most countries of the world, the youth are looked at as the future of their nations. The youth are often referred to as the future leaders. Can you begin to imagine what it means for a nation when the future leaders and the supposed future of the nation cannot differentiate between good and bad? This is an extremely alarming situation, which should capture the attention of every well-meaning Nigerian.

“To see evil and call it good, mocks God. Worse, it makes goodness meaningless. A word without meaning is an abomination, for when the word passes beyond understanding the very thing the word stands for passes out of the world and cannot be recalled.” ― Stephen R. Lawhead

WHY WE ALL MUST BE CONCERNED
My shock is not only in relations to these four young people. It is a tendency, one which was repeated by another young man, Precious Ubogu, who came out to repeat the same words that everybody who is talking about MMM should shut up their mouths. The same tendency was manifested by another misguided enthusiast by the name of Musa Usman. To make things worse, some of these blinded youth actually call themselves pastors. A few of them actually wrote me to express their disagreement with my stance. They believe MMM and other “get rich quick” schemes they are involved with are the way to go in this economic recession Nigeria is currently facing.

According to this Scripture above, woes, curses and tragedies are a portion of any nation whose kings and princes eat in the wrong manner. As we have already mentioned above, the youth of any land are the future leaders of that country. So if our future leaders, our princes, are so misguided as to taking evil to be good, the future of that nation is doomed. Hence I believe it is my obligation and the duty of every well-meaning Nigerian to raise his or her voice against the lack of virtues and the spread of vices in our society.

That Scripture above speaks about kings and princes eating in the morning. That means they eat at a time when they are not supposed to. Morning is not a time for feasting; morning is a time for labor. When the MMM proponents want to feast where they have not labored, they have already lost. They have lost because the word of God and His standards can never be compromised without consequences. When the Bible says woes, curses and catastrophes are the portion of those who engage themselves in such practices, it is, my friends, an unavoidable finale.

WILL WE HAVE A FUTURE OR NOT AS A NATION?
What schemes like MMM and others are doing is to invite people to neglect hard work and dignity of labor while expecting them to harvest where they have not sowed. Princes eat in the morning because they are expecting to get something for nothing. These youths eat in the morning because they just want to lie in their beds, not working, not doing anything, yet reaping off their friends, relatives and colleagues through their 360 percent a year returns. This is the reason why they have already lost. They will reap sooner or later sorrows and losses. “Woe to thee, O land, when thy king is a child, and thy princes eat in the morning!”

“I don’t want to live in the kind of world where we don’t look out for each other. Not just the people that are close to us, but anybody who needs a helping hand. I can’t change the way anybody else thinks, or what they choose to do, but I can do my bit.” ― Charles de Lint

The only way for Nigeria to avoid the impending collision with these consequences of lack of virtues is to begin to raise an alarm right now. We need to begin to give our young people a clear message in differentiating what is wrong and what is bad. If we as a nation are to avoid the woes, curses and tragedies spoken about in Ecclesiastes, we must take charge of giving sound orientation to our youths and future leaders. All informed Nigerians should join the campaign to sanitize the national psyche of our youth.

A CHALLENGE NOT JUST FOR THE GOVERNMENT
This is a task that must not be left only for the government to pursue. They are clearly overwhelmed with other national duties. It is time for every Nigerian to begin to call a spade a spade. Our churches have largely failed in the sense that most of them too cannot differentiate what is wrong from what is good. In our churches we have reduced righteousness only to the common known sins of smoking, drinking and sex. Other virtues are almost buried, detailed and thorough analysis has not been given to qualities that are responsible for national growth and development. Virtues like trust, faithfulness, integrity, hard work, diligence, excellence, attention to details, perseverance, truth, responsibility, delayed gratification, contentment, etc. are usually disregarded.

“The greatest temptations are not those that solicit our consent to obvious sin, but those that offer us great evils masking as the greatest goods.” ― Thomas Merton

It is this disregard that will make such young men as mentioned above to think that they are not doing anything wrong when they promote Ponzi schemes and pyramids. In their mind, as long as they are not smoking, drinking or having illicit sex, they are Christians and they are fine, not knowing that being a Christian is much deeper than their surface knowledge.

The Bible says my people perish for lack of knowledge. A careful read of that Scripture in Hosea 4:6 will reveal to us that it is not just ignorance or lack of knowledge that causes destruction. The real reason for the destruction that comes upon people is not just because they don’t know, but because they refuse to acknowledge their ignorance. This is the problem that I see in a lot of our young people today. They don’t know, yet they refuse to admit their ignorance. Hence, destruction is practically inevitable, unless we do something quick and fast.

“My people are destroyed from lack of knowledge. Because you have rejected knowledge, I also reject you as my priests; because you have ignored the law of your God, I also will ignore your children.” – Hosea 4:6