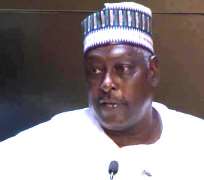 The Senator Shehu Sani-chaired ad-hoc committee in its findings read in the senate on Wednesday December 14th found Secretary to the Government Babachir Lawal guilty of gross misappropriation of millions of naira in contracts meant for the rebuilding and upkeep of the Boko Haram-devastated northeast. [Watch Senate video ]

According to the findings of the committee, the frivolous contracts included almost a million dollars for "removing grass" awarded by the Presidential Initiative on the North East (PINE) to a company from which most of the funds were allegedly siphoned into another company's account to which Babachir was director and is still signatory.

The wickedness and plain evil in the findings is beyond imagination. While the Buhari administration struggles to squash the reality of the suffering of the millions of displaced and hungry victims of Boko Haram in the northeast, to find the same Presidency involved in diversion of scarce funds for rebuilding the zone is unthinkable.

The senate called for the immediate suspension and probe of SGF Babachir, citing the swift action of the State Security Department, SSS against corrupt judges. But rather than for the rule of law to be followed and Nigeria's authorized and equipped agencies to have immediately and even before the Senate review, investigated Adamawa son, Babachir and retired him of his duties towards prosecution, this was not done.

Till date the Economic and Financial Crimes agency and Independent Corrupt Practices and Other Related Offences agency, ICPC, and the SSS have all not swarmed down on SGF Babachir in the urgency to protect the displaced persons, homeless and jobless north-easterners and the health of Nigeria as a whole. Rather bUhari evaded the proper constitutional route of investigating all Nigerians accused of corruption and shielded Babachir by asking for the Attorney general to quietly investigate the matter.

The Attorney general is not equipped and tasked to lead investigations on corrupt persons. The AGF is an agency arbitrator whose duty is to review cases investigated by the SSS, ICPC, EFCC and Police. The police have the duty to arrest accused persons and or when when the cases involve financial crimes, other departments more specialized are invited. Kano-based Human Rights Attorney Umar Sa'ad Hassan reacted strongly to this infraction in a recent important article .

Handing over the Babachir Lawal case to AGF Malami is a direct act of subversion of justice by President Muhamamdu Buhari.. Babachir is an ordinary civil servant and is not above the law and Nigeria's agencies designated with the duty of addressing cases of corruption and other malfeasance.

The sickness in diverting money of orphans and the oppressed cannot be over emphasized as I have tried to capture in a recent article .

We find it highly disappointing and distressing to see President Buhari shield his own even in the face of accusations of misappropriation of funds for Nigeria's poorest and most devastated by the failures of the government over the years.

Pending cases of corruption also side-swept including against the chief of Army, Lt. Tukur Buratai, Interior minister Dambazzau, chief of staff Abba Kyari and others involving senators that are being ignored are painful for those of us who campaigned for "change" and justice with equity.

It is time for change.
Dr. Peregrino Brimah; @EveryNigerian