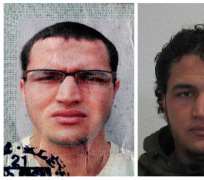 Anis Amri, the suspect before he was shot dead
Anis Amri, the chief suspect in the deadly terrorist attack on a Christmas market in Berlin this week, was killed by the police in a shootout outside Milan around 3 a.m. Friday, ending a brief but intense manhunt across Europe, Italian officials announced.

Mr. Amri, during a routine traffic stop, was asked to show identification papers. He immediately opened fire and shot the officer who had asked for his papers. The second police officer opened fire, killing Mr. Amri, officials said.

“The person who attacked our police officers was killed,” Interior Minister Marco Minniti said at a news conference. “There is absolutely no doubt that the person who was killed was Anis Amri, the suspect in the terrorist attack in Berlin.”

Law enforcement authorities across Europe had been hunting since Wednesday for Mr. Amri, a 24-year-old Tunisian who moved to Italy in 2011 and then relocated to Germany in 2015.

He was described as armed and dangerous, and a reward of 100,000 euros, or about $104,000, was offered for information leading to his capture.

“As soon as this person entered our country, he was the most wanted man in Europe, and we immediately identified him and neutralized him,” Mr. Minniti said, though he did not specify when the police learned that Mr. Amri had entered Italy. “This means that our security is working really well.”

Mr. Minniti was joined at the news conference by Franco Gabrielli, the chief of the state police, and by Gen. Tullio Del Sette, the commander of the Carabinieri. Mr. Minniti declined to discuss the details of the operation, noting that the investigation was still underway. Italian officials surrounded the corpse of the suspected terrorist

The officer whom Mr. Amri shot, identified as Cristian Movio, 36, was wounded in the shoulder, and needs to undergo surgery, but the injury did not appear to be serious, according to Mr. Minniti. The other officer, who shot Mr. Amri, was identified as Luca Scatà, 29.

Panorama, an Italian newsmagazine, reported that Mr. Amri was killed in a routine traffic stop at 3 a.m. in the Piazza I Maggio in Sesto San Giovanni district in northern Milan.

Anis Amri was wanted by the police in connection with the Christmas market attack in Berlin this week. Credit German Federal Police

Mr. Amri left Tunisia, according to his relatives, with dreams of making money and buying a car. After arriving in Italy, he was a violent inmate who spent time in six jails.

In Germany, he was one of about 550 people identified as a danger to the state and placed under special surveillance.

Yet he was able to ignore deportation orders and brushes with the law, roaming freely until he was believed to have seized a truck, killed its Polish driver, and rammed it into a crowded market Monday night at Breitscheidplatz, a main square in Berlin.

Thanks to the brave efforts of police officers, “the Italians can have a very happy Christmas,” Mr. Minniti said. “Italy should be really proud of our security.”

Mr. Minniti then added that he was “entirely satisfied” with the operation. “These people in our police forces are exceptional,” he said. “The police officer who was shot is so young, and he was just doing his job, yet he did an extraordinary service to the community, both him and the driver. I sincerely think this. I think that the whole country will agree with me and will want to tell them, these two policemen.”