I Am Not Running For President In 2019 – Jonathan 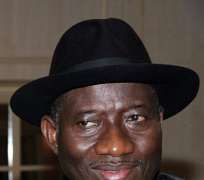 SAN FRANCISCO, December 23, (THEWILL) – Former president, Goodluck Jonathan says he has no plan to contest the 2019 presidential poll, debunking an online report which claimed that he spoke about 2019 elections in a meeting with his kinsmen in his hometown, Otuoke, Bayelsa State.

Dismissing the claim as lies, Jonathan stressed that he was neither in his home state on the stated date nor met with his “kinsmen who paid him an end of year visit”, as claimed in the report.

The immediate past president spoke in a statement issued by his media aide, Ikechukwu Eze, describing the story as mere “fabrication”.

The statement read, “Our attention has just been drawn to a fabricated online publication alleging that the former President Goodluck Jonathan made comments on the 2019 elections, while hosting his kinsmen in Otuoke last Tuesday.

“Those reports are false and bear no truth whatsoever. The former President was not in Otuoke on Tuesday , neither did he make the comments attributed to him. In fact, he has only just returned to his community to spend Christmas having been away for two weeks, so he could not have been hosting anyone there last Tuesday.

“Of what good is it to our national development efforts if some people spend so much energy spreading falsehood about fellow citizens and our nation?”

It ended by stating that the former president wishes “his fellow compatriots a merry Christmas and prosperous New Year in advance, and advises all to always channel their efforts towards working to attain the nation of our collective dreams”.