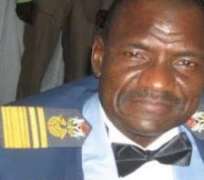 It is a case of a hunter becoming the hunted!
Air Commodore Umar Mohammed (retd) was a member of the committee set up by President Muhammadu Buhari to investigate the procurement of arms and equipment in the Armed Forces.

They were meant to unearth the underhand dealings that played out in the arms contracts in which several billions of dollars were committed in the battle to stamp out Boko Haram insurgency in the North East. But Mohammed himself is now subject of prosecution on a related matter of money laundering.

Shuaibu Labaran, a lawyer representing the office of AGF,  told a Federal High Court, Abuja that upon receiving intelligence, operatives of the Department of State Services (DSS) stormed Umar's home, conducted a search and recovered $1,030,000 cash and other currencies.

Labaran during his opening remarks , as the lead prosecution lawyer in the trial of Mohammed and his firm, Easy Jet Integrated Services Limited, before  the court presided by  Justice John Tsoho.

Under the Administration of Criminal Justice Act (ACJA) 2015, a prosecutor is required, before the commencement of trial, to render an opening statement, containing a summary of his/her case against the defendant.

Earlier, Labaran told the court that the prosecution had complied with its order for Umar's release from DSS' custody, having fulfilled his bail condition, following which he applied to make the opening statement.

He said his client was released on December 2. Liman did not object to Labaran's request to make an opening statement.

Labaran said: “Following intelligence over a case of money laundering and unlawful possession of official documents and firearms, operatives of the State Security Service (SSS), armed with valid and subsisting search warrant, conducted a search in the premises of the 1st defendant (Mohammed).

“During the search, large sums of money in different currencies and denominations, including $1,030,000 cash were recovered.

“Investigation revealed that the said money was part of a transaction between the 1st defendant and the 2nd defendant (Easy Jet Integrated Services Limited), which offends relevant provisions of the Money Laundering Act, having failed to pass through any financial institution.

“The prosecution, in the course of trial, will lead evidence to show the official documents found in the possession of the 1st defendant and the purpose for which those documents were kept in his possession, as well as the firearms that were also recovered.”

“In the course of trial, the prosecution will lead evidence to prove these facts and tender exhibits recovered, and other evidence in proof of the charge pending before the court,” Labaran said.

At the completion of Labaran's statement, Justice Tsoho directed parties to agree on a convenient date for trial to open.

Liman and Labaran agreed to return on February 14, next year. The judge adjourned till that date for the prosecution to open its case.

Umar, 54, and his company, Easy Jet Integrated Services Limited, are being tried on a four-count amended charge of money laundering and unlawful possession of firearms and official documents.

They are accused of conspiracy and accepting $1,030,000 in cash from a firm, Worldwide Consortium PTY Ltd, as payment for flight services without going through a financial institution as required by law.

Umar was accused of being in possession of two pump action guns (marked: SBSG Magnum 397 and SBGS Interpress 09-1573) between June 1, 2011 and June 19, 2016 without valid licences and thereby committed an offence contrary to Section 4 of the Firearms Act 2004 and punishable under Section 27(1)(b)(i) of the act.

He was also accused of having at his 4, Lungi Close, Mississippi, Maitama, Abuja home “classified/official documents without lawful authority and thereby committed an offence contrary to Section 1(1)(b) of the Official Secret Act and punishable under Section 7(1)(a) of the same Act”.