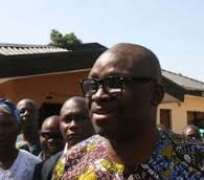 Ekiti State governor, Mr Ayodele Fayose, has faulted the Chairman of the Independent National Electoral Commission (INEC), Professor Mahmood Yakubu on reasons for the renewed electoral violence in the country, saying; “Violence returned to our electoral process because of INEC partisanship and manipulation of the electoral process in?favour of the All Progressives Congress (APC).”

He said “rather than lamenting, the INEC chairman should return the electoral commission to what he met by detaching it from the APC,which INEC has obviously merged with,” adding that; “if INEC is?neutral as it used to be before APC took power, there won't be?electoral violence.”

In a statement issued on Wednesday, by his Special Assistant on Public Communications and New Media, Lere Olayinka, Governor Fayose said; “There were elections in Nigeria between 2011 and 2015, and those?elections were credible, such that Nigerians were sure that popularcandidates and parties would emerge victorious because votes were?allowed to count. Then, violence was no longer part of our electoral?process. But sadly, this present INEC has destroyed all those gains and returned Nigeria to the era of ballot box snatching.”

He said it was shameful that after casting their votes, votes counted and announced publicly, Nigerians now need to police their votes to?collation centres to prevent figures already entered into relevant?INEC forms from being altered.

The governor, who counselled Professor Mahmood Yakubu to be mindful of his name and purge the electoral commission under him of partisanship?and election manipulation, said; there was no way President Muhammadu?Buhari would have been elected if INEC, under Prof Attahiru Jega was?the way it is now.

“By returning to the old system of accreditation and voting at the same time, and destroying the credibility of our electoral process, such that unpopular candidates are now having edge over and above those acceptable to the people, INEC by itself caused the electoral violence witnessed in the last 12 months.

“Even judges that will sit on election matters are now pre-arranged and picked even before the election, such that after using INEC and security agencies to pervert the will of the people, tribunals are used to authenticate the electoral fraud.