WE HAVE COMMENCED COSNTRUCTION OF ROADS IN SAMBIZA FOREST 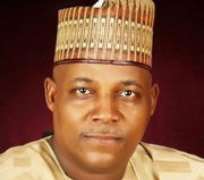 As the military gradually end counter insurgency operation in the North-east, the military under the operation Lafiya Dole has commenced construction of roads within the Sambiza forest and Alagarno the spiritual headquarters of Boko Haram to open up the forest and ease their operations.

Briefing newsmen at a press conference held at the headquarters of Command, the theater Commander Operation Lafiya Dole, Major General Lucky Irabor said “we have embarked on roads construction within the Sambiza forest to open up the area and also ease our operations within the theater”.

“ I call on individuals and cooperate organization to come in and support the military, as everything cannot be left to government even with construction materials and other materials, as roads are essential in reviving the economic development of the North-east,” the theater commander added.

He said within the last two weeks, their troops have rescued 1,880 civilians mostly women and children across various locations within the theater, arrested 504 Boko Haram terrorists, while 19 surrendered, adding 37 forigners were arrested and are undergoing interrogations to ascertained whether they are terrorists or not.

General Irabor called on general public more especially female student of tertiary institutions to be wary of new recruitment website, as Boko Haram insurgency is an evil that was meant to destroy the society.

“I also urge the general public to continue to support the military in our final move to wipe out insurgency in the north-east through the provision of useful information and not to follow the ways of some media outfit that were bent to bring down the military, “the commander added.