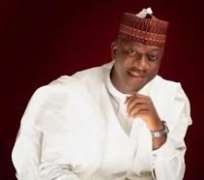 The absence of the judge presiding over Abdulmuni Jibril Kofa’s case against the National Assembly and Speaker of the House of Representatives, Yakubu Dogara, on Today stalled the sitting of the Federal Hignh Court, Kano slated for Dec. 20.

Speaking to newsmen at the court, the lead counsel for Kofa’s constituency, Mr Bashir Muqaddam, said the Judge, Justice Idris Koko, had travelled out of the state for the Judges Conference, currently holding at the Federal Capital, Abuja.

He said after returning from the conference, the Judges would proceed for the Christmas and New Year vacations, According to him, the judges are expected to resume on Jan 19, 2017 while the case has been fixed for Jan 18, 2017 for mentioning.

Mr. Bashir narrated that Our prayer seeks that the sum of N2 billion be given to our client, Hon Abdulmumini Jibril Kofa, as payment for damages to his reputation. When we resume on Jan. 18, 2017, the case will come up for mentioning, Muqaddam said. He said the constituency was challenging the legality of Kofa’s suspension by the House of Representatives.

We want to know whether his whistle blowing role in exposing how the 2016 budget was padded was in contradiction of any stipulated law of the land. Fundamentally, we want an immediate re-instatement of the suspended member and the court to also order for the payment of all his Kofa’s entitlements for the suspension period.

Also speaking, the leading complainant in the case, Alhaji Ibrahim Tiga, assured Kofa’s supporters who came to the court that they would follow the case to its logical conclusion so as to pleased the mines of Hon kofa`s Billions of supporters.