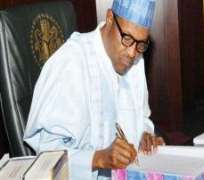 The Presidency has hinted the Senate about possible ministerial appointments early next year with 10 ministers of the President Muhammadu Buhari led administration to be shown the way out of government in 2017.

The move by the president was confirmed when presidency reportedly reached out to the Senate informing it of its intention to replace 10 of the ministers in the federal cabinet come 2017.

The report further revealed that the move is to ensure a smooth screening process by the Senate, which has seen its leadership complained about the executive not being carried along by the executive.

The need for the cabinet shake up, it was reported, was to ensure that the under-performing ministers are shown the exit door as the Buhari led administration has been plagued with criticism that it had put round pegs in square holes.

Determined to effect changes, following these criticisms, having worked with the ministers for 14 months, President Buhari is reportedly set to put things in order in his cabinet.

The report also disclosed that while some of the 10 ministers to be affected by the exercise will be dropped, others would swap portfolios.

However, a cabinet shakeup has become imminent as Buhari is yet to fill the two existing vacancies created by the demise of James Ocholi, former Minister of State for Labour and Productivity and appointment of the Minister of Environment, Mrs. Amina Mohammed as the Deputy Secretary-General of the United Nations (UN).

The presidency is yet to confirm or deny the reports which is currently being bandied around Aso Villa.

The Presidency is yet to drop hints on the identities of the 10 Ministers that will be dropped but when Nigerian Bulletin checked through some of President Buhari's ministers, here are 10 ministers the president may be dropping or change the portfolio for the next two years in office.