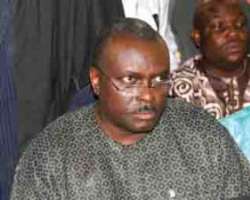 Jailed former Governor of Delta  of Delta State, Chief James Onanefe Ibori, has asked journalists who have made maligning him their pass time to desist from doing so.

Ibori  said that he is  particularly worried by the bare-faced lies, that some journalists and news organizations have continued to heap against him.

He spoke  in a statement on Sunday signed Tony Eluemunor, Head of Ibori's Media Office.

Accordingto the stateent, What makes it galling is that the matter under contention was the Department of State Security's report that stopped the Senate from confirming Mr. Ibrahim Magu as the Chairman of the Economic and Financial Crimes Commission, EFCC, and did not warrant the dragging in of Ibori's name at all.

Yet, the online publication went wild all the same, making baseless accusations against Ibori, though it had said it was checking the facts in DSS' allegations. Specifically, on

“ALLEGATION ONE: That during the tenure of Farida Waziri as EFCC chairperson, sensitive documents were found in Mr. Magu's home”, the online newspaper wrote: “The facts do not support that claim. A reporter for this newspaper extensively reported that event in 2008 when it happened, and is familiar with what transpired at the time”. Chief James Onanefe Ibori Ibori is not concerned with the fact that the publication chose not to cross-check the facts but rested on answers a journalist got almost a decade ago, and he did not say how he acquired that information, no, that is left with readers to worry about. What Ibori finds irresponsible is what follows: “Based on pressure from political gladiators of the period (among which were former Governors James Ibori and Bukola Saraki), then President Musa Yar'Adua unceremoniously removed Nuhu Ribadu as chairman of the EFCC”. Mr. Nasir el-Rufai has exposed this claim as a terrible lie.

In his book, The Accidental Public Servant”, he stated the source of the trouble he and Ribadu had with the late President Umar Yar'Adua. On page 358, in a section entitled “Umaru Asks Nuhu for Support: the Beginning of Our Trouble” he wrote that Ribadu was so maddened that former President Olusegun Obasanjo had favoured Yar'Adua above Nasir-el-Rufai to succeed him as President in 2007 that he told Yar'Adua to his face:” Well, Obasanjo has not told me, and as far as the presidency is concerned, I have my candidate for president, and that is El-Rufai.

El-Rufai continued on page 359: “It took sometime before Nuhu figured out Obasanjo's games and what was really happening. Nuhu's instinctive reaction was that of a typical policeman – dust of EFCC's files and comb for petitions against Umaru. Nuhu did not realize it at that time, but he was the one in trouble not Obasanjo or Umaru.

He dusted off all the files against Umaru and launched investigations. He was clearly trying to take Yar'Adua out of the race and narrow all options to zero except for El-Rufai” Ibori continued: “It is clear that from El-Rufai's that there was no way a clear-headed Yar-Adua would have appointed a power-drunken Ribadu, who had unjustly arrested some Katsina state's LGA chairmen just to demonise Yar'Adua to remain as EFCC Chairman – to continue to arrest people unjustly, play politics with his office and hypocritically claim to be fighting corruption when he was neck deep in the worst corruption – maligning others just because of politics. So, Ibori has advised Nigerian journalists to try and give Nigerians a decent picture of events because the nation's future would rest on that.

In another Development, Ibori has called on his well-wishers to disregard reports about when he will return to Nigeria. A newspaper wrote at the weekend: “Ibori would on December 23 arrive in a chartered jet via Heathrow Airport, London to the Murtala Muhammed International Airport, Lagos, where family members, friends and close associates are expected to receive him in a red carpet reception before jetting to Osubi Airstrips, near Warri, from where his convoy would take off for his Oghara hometown for another grand reception”.

Ibori has asked the public to disregard such wrong information. An earlier report had said Ibori would return on an Arik Air flight. When the time comes any important information will be made available to the public and nothing would be left for conjecture.