You have no moral right to call for SGF resignation,Group tells federal lawmakers 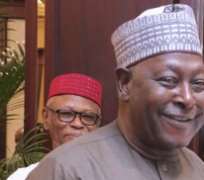 A coalition of Northern group has described as unrealistic the call by the Senate on Mr Babachir Lawal, Secretary to the Government of the Federation (SGF), to resign and face prosecution.

The coalition tagged Northern Emancipation Network in a statement by its Secretary, Mr Abdul-Azeez Suleiman on Saturday in Minna, also said that the call was “unacceptable'' to it. It said that it disagreed with the “suspicious motive'' of the Sen. Shehu Sani committee which did not “consult or invite'' the SGF to give his own side of the story.

According to the statement, the NASS has stripped itself of such moral rights by openly shielding its leaders that accused of corrupt practices. “We challenge the moral authority of the Senate to call for the SGF's resignation after trooping behind the Senate President, Bukola Saraki to shield him from prosecution for obvious misconduct. SGF Engr Babachir David Lawal

“Likewise, the House of Representatives has no moral justification to seek anybody's sack over alleged official misdemeanour after collectively protecting its Speaker, Yakubu Dogara from answering the serious integrity questions raised by its own member, Abdulmumin Jibrin,'' the groups said.

It insisted that before the National Assembly can reclaim whatever moral right to sanction any official from the executive, it must first surrender its leadership for proper sanction. “Specifically, we call on Senate President Bukola Saraki to resign and face his pending trial before the Senate can claim the right to call for the SGF's resignation and prosecution.

“We also call on the House of Representatives Speaker, Yakubu Dogara and other officers accused by Jibrin to vacate their offices to allow unhindered investigations as they have no right – legal or moral – to stand as judges in their own case,'' it said. “We wish to categorically state that this coalition and many other groups in the North will never cooperate with any planned protest being sponsored by the NASS to press for the SGF's resignation.