Obama to Putin: US will retaliate Russian hacking 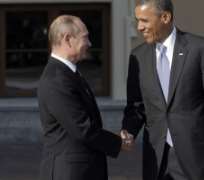 Obama says U.S. will respond to Russian hacking, eventually. “We need to take action,” he told NPR in an interview aired this morning. “And we will — at a time and place of our own choosing. Some of it may be explicit and publicized; some of it may not be.”

Though U.S. intelligence agencies have unanimously concluded that Russian-backed hackers worked to influence the recent election, the president did not endorse the CIA 's conclusion that the effort was meant to elect Donald Trump.

“'There are still a whole range of assessments taking place among the agencies,' Obama told NPR , referring to an order he has given the U.S. intelligence community to conduct a full review of the cyberattacks before Inauguration Day. 'And so when I receive a final report, you know, we'll be able to, I think, give us a comprehensive and best guess as to those motivations. But that does not in any way, I think, detract from the basic point that everyone during the election perceived accurately — that in fact what the Russian hack had done was create more problems for the Clinton campaign than it had for the Trump campaign.'” Read, watch, and listen, here .

So why didn't Obama act more forcefully before the election? Because “they didn't want to appear to be interfering in the election and they thought that Hillary Clinton was going to win and a potential cyber war with Russia wasn't worth it,” reports NBC News, citing anonymous “multiple high-level government officials.”

Trump's response? This tweet : “If Russia, or some other entity, was hacking, why did the White House wait so long to act? Why did they only complain after Hillary lost?”

That's deceptive, writes New York magazine: “In fact, it did say something before the election. Here is the first sentence of Ellen Nakashima's October 7 Washington Post report : 'The Obama administration on Friday officially accused Russia of attempting to interfere in the 2016 elections, including by hacking the computers of the Democratic National Committee and other political organizations.' Trump was even presented with this information onstage at a presidential debate, where he dismissed it. What's astonishing is that Trump is not only denying the substance of the accusation, he's denying that the accusation was even made. Let this sink in: The president-elect of the United States is insisting that something that was witnessed on national television by more than 66 million people never happened.”

Meanwhile, the Washington Post's Paul Waldman makes a list of the mounting connections between Trump, his prospective administration, and Moscow. His conclusion : “We need an independent, public investigation of the Trump-Russia scandal. Now. The scandal is widening, and it could be one of the most serious in American history.”