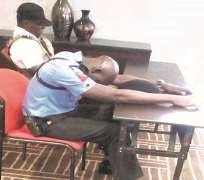 A reporter with a national daily in Lagos, Mr. Lawrence Okuoghae, in April 2016, began to feel unsteady while he was working on a story that needed to be submitted for publication in an hour.

His dizziness was understandable; he had not got a good sleep for three days due to pressure in the office.

A dutiful journalist, Okuoghae said he loved his job and enjoyed meeting deadlines. But on that Thursday night, he said his entire system was dispirited. He knew there was something wrong but could not exactly tell what was amiss. The harder he struck the keyboard to continue the story he was working on, the weaker he got. Even with his editor standing right behind him, and in the presence of his colleagues, he lost consciousness. He was rushed to the hospital and the doctor said he was suffering from fatigue. It was there that he confessed that he had not slept well for days.

Hear him: 'I can't forget that day. It was a close shave with death and it was as a result of my stubbornness. I thought I was a superman because I don't fall ill. To be sincere, I can't remember the last time I visited the hospital for a check-up.'

Okuoghae's experience wouldn't appear strange to many. In fact, it is a common feature in Nigeria. But not everyone that tries such stunts lives to tell the story.

While many people spend huge sums of money to stay healthy, they mostly forget that getting enough sleep also promotes good health.

During the holidays and free hours, one of the best things to do with your time is working on fixing your sleeping habits, experts have advised.

According to recent reports, in most busy cities, only a tiny percentage of the population has adequate sleep while more than 50 per cent doesn't get enough sleep, which is less than the recommended seven to nine hours a night.

Teens and children need more of it in building their intelligence quotient. Only 5 per cent of the population gets more than nine hours of sleep a night.

Adequate sleep makes you happy
There have been warnings by lifestyle physicians that sleeping poorly could ruin one's life. In a notable study in the United States that followed 909 working women, a poor night's rest affected their happiness as much as tight work deadlines, and it had an even bigger impact on their mood than significant income differences in the group.

It was discovered that people who slept enough had better moods and fewer problems with depression, anxiety and low self-esteem.

Another study done this year in South Africa by a group called Public Health Practitioners showed that sleep loss had an even stronger effect on mood than it did on cognitive ability or motor function.

Those who don't get enough sleep also experience deficient libido and are more likely to have different sexual problems, including erectile dysfunction. And sleep itself is said to be restorative — it increases testosterone levels, which boost sexual drive for men and women.

Mental alertness
Research has shown that those who get enough sleep have sharper memories and perform better in mental activities. Experts say people who stay awake 30 hours after learning the same task will have a much harder time improving their skills. It was gathered that school children in many developed countries are made to observe siesta for up to an hour during school hours.

Better, safer driving
The Federal Road Safety Commission (FRSC) says driving sleepy is like driving drunk. Both have been identified as common causes of death and serious injuries on the road. And in tests, sleep-deprived drivers perform like alcohol-impaired drivers.

In the United States, drowsy driving is said to be responsible for 100,000 crashes and 1,500 deaths every year, according to the National Sleep Foundation. There are no accurate statistics on such in Nigeria, but more than 10,000 deaths occur yearly due to accidents at night, caused by tired and sleepy drivers.

A study done in 2014 of 50,000 people in Sweden, found that drivers not getting enough sleep were twice as likely to die in an accident.

Health risks
People who don't sleep enough are more likely to develop diabetes — even if they are skinny. According to endocrinologists, Type 2 diabetes is associated with lack of proper sleep. It is a disease that can lead to stroke, amputation, blindness and organ damage.

A study published in Clinical and Experimental Dermatology in the US, found that good sleepers recovered better after ultraviolet light exposure. They also showed fewer signs of aging.

'We don't function well without sleep. Our bodies get tired and our eyes get tired. The longer you stay awake, the more vision errors you make, ranging from tunnel vision to seeing double to even, eventually, at scary levels of sleep loss, hallucinations,' said Your Health, an online health magazine.

Early this year, a group of researchers on chronic diseases, in the US, at the end of a study that lasted 13 months, revealed that some certain work schedules could expose one to developing certain kinds of cancer.

'People who do shift work, night shift, and have disrupted circadian cycles and thus don't sleep enough, are likely to encounter some serious health problems. These night workers are more likely to develop colon and breast cancer,' they submitted.

Some experts, who also recommended enough sleep, said it would avert heart problems. In the recommendation, it was made clear that sleeping five hours or less a night was associated with a 45 per cent increased risk for heart attacks.

'Keeping people awake increases people's blood pressure; it is applicable to the young and the old,' they said.

According to the experts, instead of trying to minimise loss, they start looking for risky big gains: 'That is a good reason to make sure you sleep before making any big purchases or selling properties.'

Madness and more
A consultant family physician, Sodipo Oluwajimi, told Daily Sunthat a good sleep should ideally last for eight hours upwards, which he explained was necessary for optimal growth in children, concentration and increased productivity in adults. It also prevents hypertension.

'Due to the nature of life in cities, it is becoming more difficult to get adequate sleep, which is also leading to an increase in mental and other psychiatric illnesses. It can bring about depression, psychosis and suicide.

'Signs of inadequate sleep are daytime sleepiness, difficulty in concentrating, irritability and use of stimulants, such as caffeine, to stay awake,' he explained.

A general practitioner based in Lagos, Otedola Adeoye, said getting enough sleep helps prevent migraines and other headaches. He said many people ignorantly run to take pain relievers when they feel any pain or headache.

'It is unfortunate that a lot of Nigerians are not yielding to the doctor's advice when it comes to the issue of sleep. They find it cheaper to buy drugs over the counter, and the system encourages it too. Most symptoms that people take different drugs for don't need any drug. If you find yourself cringing due to a sudden headache or other sensational feeling, all you need do is to look at your sleeping schedule.

'Poor sleep quality is what every individual needs to work on. No one is asking you to sleep all day, but eight hours a day could perform the magic. The eight hours might not be constantly achievable due to changes in work schedules, however, always make up for it before it gets accumulated.

'No doubt, good sleep improves productivity at work and more focus at home. It is indisputable that the more tired you are, the harder it is to concentrate on something, which can take a toll on both work and your personal life. We always advise our patients to get not just rest, but some good sleep if they want to focus either on a job or a conversation. Good rest, most times, leads to sleep. Sleep is good, though too much of it can also be bad. But the fact is that there is rarely too much of it, especially in Lagos,' Adeoye said.

He also opined that people who don't get proper sleep tend to make more dangerous mistakes than those who have, especially those who do mental jobs. He said it was more pronounced and even worse for writers, editors and authors. - The Sun.