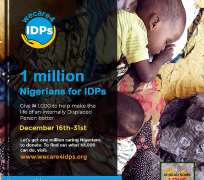 As part of efforts to improve the conditions of Internally Displaced Persons (IDPs) in the country, notable media organizations in partnership with Union Bank have publicly announced the launch of the WeCare4IDPs campaign.

WeCare4IDPs is a citizenship initiative which creates a platform for all Nigerians – individuals and corporate bodies to be a part of the solution in matters concerning IDPs by raising funds to support them.

The WeCare4IDPs campaign is calling on 1 million Nigerians to donate at least N1,000 during the campaign which runs from December 16th to December 31st. Funds raised will go directly to funding direct impact projects defined in the 2017 Nigeria Humanitarian Response Plan (HRP) developed by the United Nations Office of the Coordination of Humanitarian Affairs (UNOCHA) with the support of the Federal Ministry of Budget and Planning.

It is estimated that more than 8.5 million people have been affected by the insurgency in the North East and require humanitarian assistance. About 6.9 million children and adults are expected to be impacted if the 2017 HRP is fully implemented.

WeCare4IDPs is expected to help bridge funding gaps to implementing the HRP which is estimated will require USD $1.05bn to fully implement the plan.

Funds raised from this initiative will be committed towards the implementation of projects in 5 key areas:

It focuses on using inspiration, empowerment and action to help brands and organisations connect with their audiences, enhance their bottom-lines and lead in their industries.

It has 6 major practice areas: Corporate Practice, Technology Practice, SME Practice, Governance Practice, Faith Practice and the International Practice - with work for brands across Nigeria, Ghana, Kenya and South Africa. RED owns the continent's largest portfolio of youth media brands. Its Content Division holds brands across TV, radio, online and events including Y! Magazine,YNaija.com, Rubbin' Minds, #YTech100 and the The RED Summit. It also anchors a development firm, The Future Project, which projects include Africa's leading youth platform, The Future Awards Africa, HowCanIGetInvolved.com and Aiki.ng, which is run in conjunction with Microsoft.‎