IS NIGERIA REALLY ONE NATION? 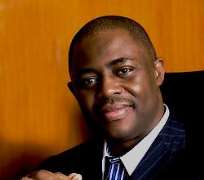 I love this country with every fiber of my being.
For three generations before me my forefathers, including my great grandfather, my grandfather and my father, have made solid and notable contributions to the developmemt of this country in both the private and public sectors.

My great grandfather, Rev. Emmanuel Adebiyi Kayode, studied theology at the great Fourah Bay College in Freetown, Sierra Leonne and Durham University in the United Kingdom after which he returned to Nigeria.

He was ordained as an Anglican priest, was the first Nigerian to take Christianity to our hometown Ile-Ife and was the first to build and pastor the first Anglican Church in that ancient town.

Throughout his life and ministry he fought for the rights of the poor and oppressed in Ile-Ife, including the people of Modakeke who, at that time, were treated as slaves and serfs. He did the same in Ondo province and Ijebu where he was later posted by the Church.

My grandfather, Chief Victor Adedapo Kayode, studied law at Cambridge University and was called to the English bar after which he returned to Nigeria.

He played a key role in the development of education in the country, was deeply involved in the fight against the excesses of our British colonial masters, fought for the rights of the so-called "African natives" and "indegenous population" in the old Lagos Colony and was the third Nigerian to be appointed to the Judiciary after a brilliant and rewarding career as a criminal lawyer.

My father, Chief Remi Fani-Kayode Q.C. SAN, CON was born in the United Kingdom, studied law at Cambridge University and was called to the English bar after which he returned to Nigeria.

Like his father, he also excelled as a lawyer and he set up the first and most successful indegenous Nigerian law firm of that time with Chief Rotimi Williams Q.C. SAN, CON and Chief Bode Thomas.

He went into politics, was deeply involved in the struggle for our independence from colonial rule and he succesfully moved the motion for Nigeria's independence in Parliament and went on to become a Minister and Deputy Premier of the old Western region of Nigeria.

I have fought military rule, been involved in the struggle for democracy and I have participated heavily in partisan politics, political commentry and political discourse in our country for the last 26 years.

I have had the rare honor and distinct privilage of serving her at the highest level of governance first as a presidential spokesman and then as a Federal Minister in two separate Ministries as far back as 10 years ago.

I have suffered persecution, self-imposed exile, illegal and unlawful incarceration and the most vicious forms of insults and misrepresentation for Nigeria over the years and I have also invested my time, resources and energy heavily into the political terrain and development in our country.

Yet despite all these wonderful opportunities, the monuemental sacrifices that my illustrious forefathers and I have made and our love for and commitment to Nigeria it is time to ask some hard questions. Those questions are as follows.

Is Nigeria really one nation or is she many nations forced to remain within an artificial, unworkable and unsustainable entity?

Are our people really "bound in freedom, peace and unity" as our national anthem proudly proclaims or is that just a deceitful mirage and never-ending illusion?

Can a nation prosper, excel or achieve its full potentials when its people are perpetually squabbling and struggling over the distribution of its meagre resources and when they have two distinct and irreconcilable world views?

Can it thrive when one group wishes to live and compete in the new, enlightened and modern free world whilst the other wishes to go back to the bondage of the dark ages?

It appears that more people are asking these questions today than ever before. Is it not time for us to answer them?

Must we wait for an ethnic or religious conflagration to occur or another civil war to take place before we accept the fact that there is something very wrong somewhere and that we may well be a nation of ethnic incompatibles?

Why is it a crime for anyone to take as much pride in their ethnic nationality and cultural heritage as they do in being a Nigerian?

Why is it wrong for anyone to say that 'I am as proud of being an Igbo or a Yoruba or an Ijaw or a Fulani or any other ethnic nationality as I am of being a Nigerian?'

What is the ethos, essence, utility, sustainability and legitimacy of a multi-ethnic, multi-cultural, multi-religious plural super-state in which the various ethnic nationalities are expected to subsume their primary identities, de-emphasise the very source and root of their being and literally sacrifice their ancient bloodlines, noble history and rich heritage on the alter of a hybrid and artificial man-made entity called Nigeria?

Is it really wrong for any of the numerous ethnic nationalities that make up our country to insist on their freedom and demand to be allowed to develop separately and at their own pace?

This is especially so where and when they feel as if they have been turned into slaves and second class citizens by others in their own country?

Is Nigeria a nation or is she a mere geographical expression? Is it true to say that there is as much of a difference between a Fulani and an Igbo as there is between a Turk and a German?

Is Nigeria anything more than a British fraud set up to serve the economic interests of our former colonial masters? Given the circimstances is it unreasonable of us to ask for our very own Brexit?

Some of these fundamental questions were first raised by the first Premier of the old Western Region, Chief Obafemi Awolowo SAN, in 1947 in his book titled 'Paths To Nigerian Freedom' but sadly few listened.

Consequently twenty years later Awolowo's greatest fears and concerns were confirmed and our three year civil war in which over three million people perished, including women and children, took place.

This was the only war in world history in which the premeditated starvation of young children and babies, in what was essentially mass murder and genocide, was described as a "legitimate weapon of war" by those who perpetrated such horrendous crimes against humanity.

Since the end of the civil war neither Nigeria nor any of its ageing leaders, many of whom were military veterans and commanders in that civil war, has expressed any regrets, shown any remorse or brought anyone to justice for what was undoubtedly the greatest mass murder of infants and butchery of the innocents in African history.

Yet nothing seems to have changed except for the fact that the ethnic identity and religious persuasion of the latest set of victims have become far more widespread and varied.

In today's Nigeria, unlike in 1966 and unlike during the civil war, it is not just the proud Igbos and ever-defiant Biafrans that are being slaughtered like flies on a regular basis but also the northern Christians, the Shiite Muslims, the people of the Middle Belt and the Niger Delta and the ever-compromising Yoruba.

Consequently the same questions are being asked today about the continued feasiblity of our national unity and cohesion but this time with far more urgency and anger and by far many more people.

Yet those that believe that they own Nigeria still refuse to listen and view those that ask such questions with suspicion, derision, contempt and even rage.

They label them as being unpatriotic and ignorant and they threaten and attempt to intimidate and bully them into silence simply because they do not share their views.

In Nigeria it is indeed a dangerous thing to be a freedom-yearning and independence-craving dissident or non-conformist and, like in the old Soviet Union before its eventual disintegration, you could end up paying for such views with your liberty or your life.

Yet one wonders how much longer this can go on before the oppressed and the voiceless get fed up with merely asking questions and instead choose to actually insist on their rights, take their destiny into their own hands, rise up to the occassion and fight for their liberty?

The quest for self-determination, freedom and liberation is a noble and legitimate cause which has never been successfully resisted or defeated anywhere in the history of the world.

Every well-educated and widely-read individual can attest to the veracity of that undeniable and incontrivertable fact.

The truth is that you cannot compel people to remain together in one nation by the force of arms forever.

It may work for some time but it cannot last in perpetuity because sooner or later the chickens will come home to roost.

The best you can do is to reach out to the disillusioned and marginalised in love and give them a reason to want to stay.

Yet few in our nation can appreciate the wisdom in adopting such a course or treading such a path. The only language that is clearly understood here is the logic of compulsion and the language of force.

Consequently Nigeria is unravelling at the very seams. I can literally smell blood on the mountain and I perceive and sense the secret massing of the bloodthirsty demon Magog, the god of war.

The quest for the peaceful division of our nation is stronger today than ever before and as each day passes it gets stronger and stronger.

It is far more compelling and stronger than it was before our civil war broke out in 1967 simply because far many more people are angry and fed up with what they are being subjected to by the powers that be and our forced union.

Millions from all over the country are quietly murmuring but soon that mumur will become a massive roar and an irresistable and irrepressable demand. It will soon become a tidal wave.

And when it gets to that point no matter how many people you lock up and kill it will not stop and neither will they be intimidated, silenced or deterred.

In fact the more people you murder, subject to bloody pogroms, persecute, marginalise, jail and destroy, all in the name of keeping Nigeria one, the louder, the greater and the more deafening the roar, the agitation and the struggle will get.

And at that point only God will be able to hold Nigeria together and He will only do so if it is His perfect will.

May God grant us the wisdom, prescence of mind and courage not to dismiss these vital and fundamental questions with the usual arrogance and contempt but rather to do some real soul-searching, indulge in a little introspection and humbly answer them as best as we can.