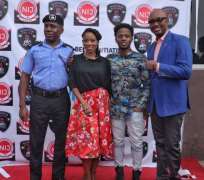 The conference was aimed at bridging the gap between the Nigerian Police Force and the media; in regards to communication, security and national responsibility.

Methods and approaches in building and promoting a progressive and meritorious relationship between the media, the police and society at large were discussed at the conference.

A panel was also held involving Tosyn Bucknor, ACP Lanre Ogunlowo, Amuwa Richard, Mike Okwoche, Chude Jideonwo and was moderated by Korede Bello; in which the societal responsibilities of both the media and the police force were identified and elaborated; inducing a debate to which the bubbly audience constantly applauded with glee.

Members of the audience also asked questions and narrated their various embittering experiences with the police.

However, the Assistant Commissioner of Police Lanre Ogulowo assured the audience there are several disciplinary measures being taken to preclude and reprimand unscrupulous policemen and encouraged the public and the media to work hand in hand with police so as to attain a common goal.

ACP Lanre Ogunlowo further emphasized on the matters of national security, stressing on the responsibility of both the media and police force as watchdogs of the society – concluding this can be achieved by playing symbiotic roles as arms of the government.

The conference marks the maiden edition of the forum; a Korede Bello initiative under his ambassadorship with the Nigerian Police Force.