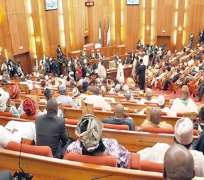 The Senate, on Wednesday, called for the resignation and prosecution of the Secretary to the Government of the Federation, SGF, David Babachir Lawal over infractions involving public procurement, particularly, contract awards by the Presidential Initiative on North East, PINE.

Following the Interim Report of The Senate's Ad-Hoc Committee on Mounting Humanitarian Crisis in #NorthEast, the Senate indicted the SGF of sharp practices in expending the funds meant for alleviating the sufferings of the displaced in North East as well as other sharp practices.

According to the report, Lawal allegedly owns one of the companies awarded contracts in the rehabilitation of the North-East.

It said Lawal resigned from the directorship of the company in September 2016 but was still a signatory to the company's account.

Raising a motion for his resignation and prosecution, Senator Dino Melaye, while reading the report of the Ad hoc committee on Mounting Humanitarian Services in the NorthEast said, the 'company was awarded a consultancy contract on invasive plant species in Yobe State'.

'The company owned by SGF Babachir Lawal to which he resigned as a director in Sept. 2016 but still a signatory to the company's account'.

Melaye said the SGF's action was an embarrassment to the anti-corruption stance of President Muhammadu Buhari's government.

He therefore called for the resignation and prosecution of Lawal.

Seconding the call, Senator Solomon Adeola also said that 'the actions of the FG in recent times is nothing to write home about.'

He said Engr. David Babachir Lawal should immediately resign his appointment as SGF and be prosecuted accordingly.

However, the Senate President, Bukola Saraki put the prayer to Vote and the Yays had it that SGF Babachir Lawal should resign.

Senate President, Bukola Saraki pointed out that the need for medical personnel from @Fmohnigeria will be followed up as well as the need for food items.

He said the AdHoc Cttee has reported some infractions while noting that Nigeria cannot continue with business as usual.

Saraki further charged a New @NePcni to see to the diligent use of resources and proper coordination.

Saraki noted that issues of corruption in the N/E be seen to a rapid conclusion. He agreed with Senator Isah Misau that APC will see things and not cover it up. He also charged the Executive arm to take the resolutions and recommendations seriously and implement them.

The Senate therefore approved the recommendation that any Government Official found culpable of sharp practices be suspended and prosecuted.

Senate Leader Ali Ndume pointed out that humanitarian funds as much as $417Million has been sent to the North East yet no sign of such funds.

Senate equally approved that contracts for the the IDPs must pass through the Bureau for Public Enterprises for proper valuation.

It also approved the recommendation that the new PCNI @NePcni coordinate relief activities for the IDPs in the North East.

Senate also approved the recommendation that personnel of the Federal Ministry of Health ,@Fmohnigeria, move to the IDP Camps in the North East.